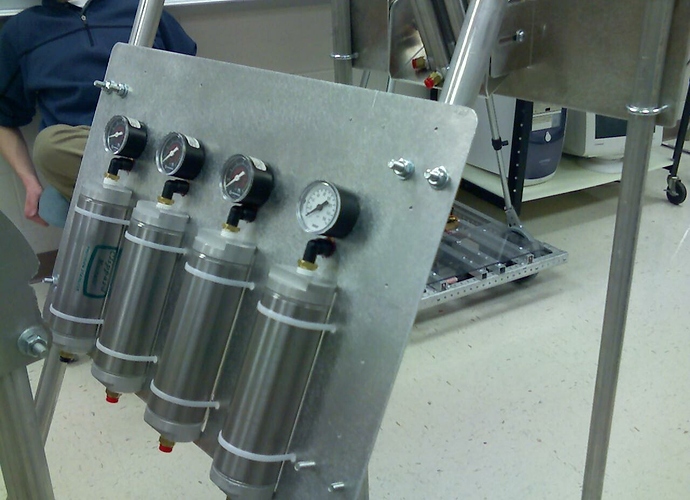 These four air tanks and individual regulators feed our pneumatic trackball launcher mounted further up the rear mast. Pictures of the functional sections to come when we get it painted and all.

Before anyone asks, no, the robot in the background is not the chassis we are using this year. We’re stil using our monocoque chassis posted earlier.

are those mounted on the back of a stolen street sign?

According to the Q and A forums, only 1 120 to 60 psi regulator is allowed between the compressor and your working side of the pneumatic.

The answers to the other questions have been clarified to make sure this is understood.

Maybe they are running their tanks at 60 psi?

EDIT: I see their ridea may be to allow more air flow (CFM) to the cylinders. Problem is that the primary regulator would still be the limiting factor.

Not if their primary regulator is upstream of their tanks, and their tanks are running at 60 psi. If they are doing this, and regulating their secondaries to say, 30psi, they will get the airflow to allow the pistons to actuate faster without completely emptying their system every time.

I’m assuming that they are using 4 cylinders, each part of it’s own leg off of the primary system, with only the output of the compressor flowing into the primary regulator.

I don’t know about it’s legality, but it is neat.

Well, much as it bothers me… thanks for the rules update. We’re currently working on some way of modifying our robot’s launching system. Much better to find this out now rather than find out at a regional.

No, this is not the back of a stop sign, its just sanded aluminum. I think it’d be bad ju ju to use a stop sign anyways (perhaps a go sign… :] )

We will be removing the extra regulators but keeping the gauges (because it looks so neat!)

The regulator is the most limiting factor, so this was our way around it.

Aha! Late breaking news! They’ve just come in and said that it works even without the extra regulators, though it isn’t as spectacular as it was before, still very serviceable.

Aha! Late breaking news! They’ve just come in and said that it works even without the extra regulators, though it isn’t as spectacular as it was before, still very serviceable.

Maybe you can paste photos of a bunch of regulators, just so it looks cool…

ive heard of a wire tuck , but a tube tuck … jeez that thing is clean man, cant wait to see more pictures of it … giving me some ideas for my P-board.