pic: Sir-StaX-Alot and the evil crossbow of doom 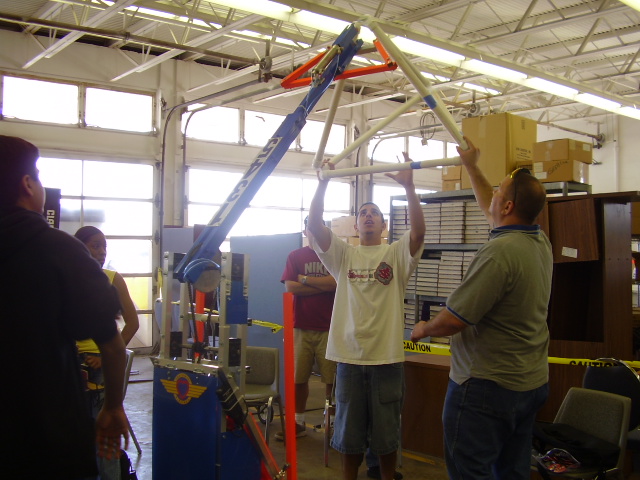 this is my husband. don’t know much of the stats b/c I’m the programmer/chairman’s award/fundraiser. so enjoy =)

You have a really hot husband.

oye ty, it IS hot. it shows off so much, all that orange and blue…but he’s mine so don’t even think about it.

the crossbow was originally something useful for our bot but we broke off the extensions too many times while playing around with the bot so we took the ends and made it into a crossbow.

you see that heart on the back? that’s announcing our wedding date.
(…actually it’s a logo from southwest airlines but shhh!)

we finished thursday night, we had a prob at the scrimmage b/c we couldn’t lift the heavier tetras (ex: the vision tetra) but we put some surgical tubing on the back and it’s just peachy now. we did really well at the scrimmage too =)

Cool, we finished… today? lol
good luck at UCF, see u guys there

we aren’t going to UCF, but we are going to peachtree. so i guess we might see you at nats.

neha, gorgeous bot, that looks totally professional, compact, and finished-off!
just out of curiosity, what are the orange posts on the front of the bot for? i can’t tell if they are part of the machine or not.

they’re for auto mode – we’ll be using them to hit the hanging-by-magnet (for lack of better words) tetras off and then go on to do w/e else we wanted to do.
(http://community.webshots.com/album/277633304rJyRpg) and they are clearer…ignore the first few pics.