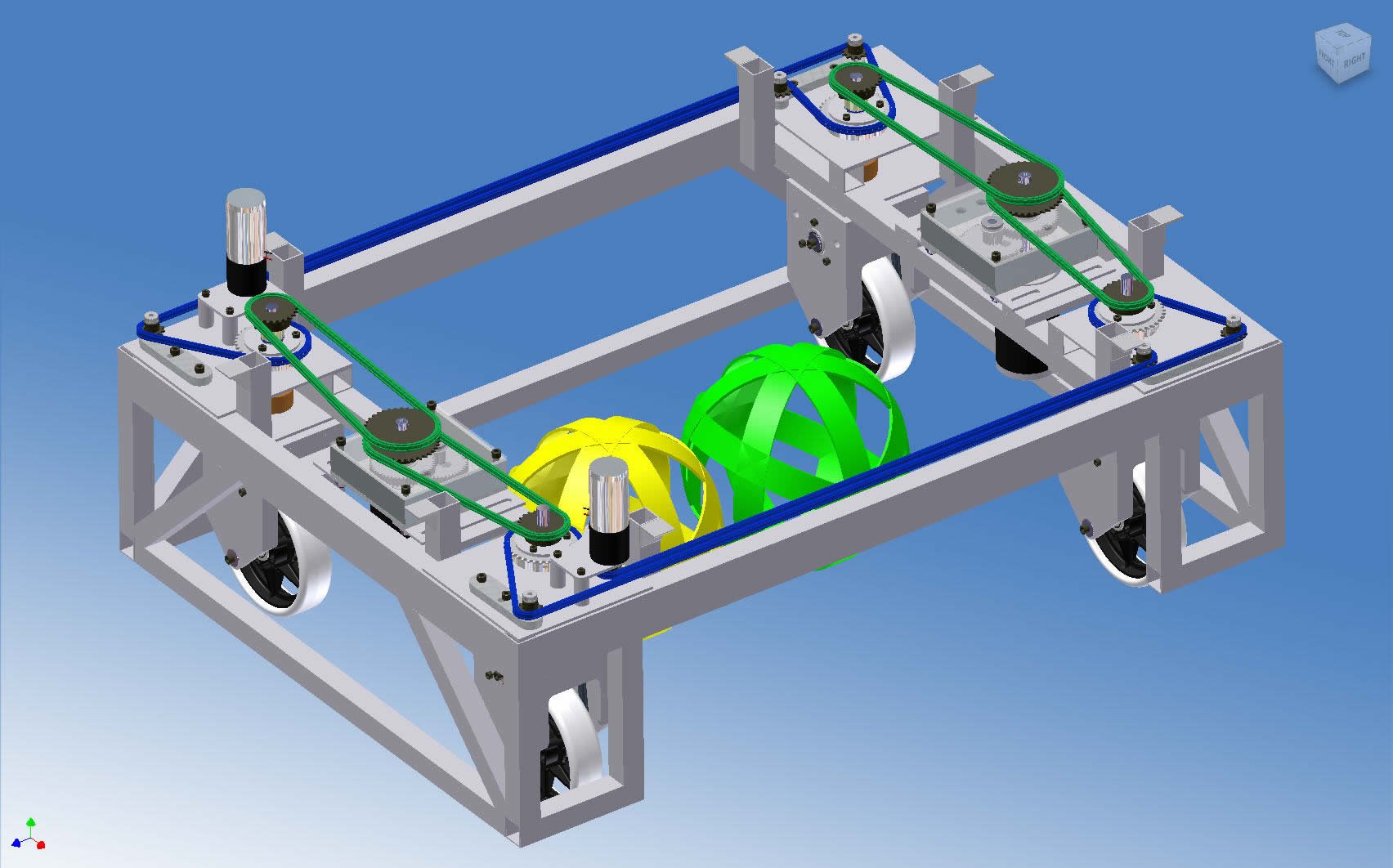 A newer version features a Dewalt tansmission instead of the toughbox as shown. In addition, the frame has been changed to provide more support.

It’s scary how similar it looks to our design

Are you using a coaxial design for the power/steering shafts?

Our prototype bot is working great so far, we’ll post videos when we have the controls figured out

Nice job on the CAD, have fun with that insane drivetrain.

Excellent. It’s like a wide side variation of what we’re building!

Have you considered powering each wheel independently, via banebots or DeWalts, in order to make a traction control system easier?

Looks like more great work from the Skunks. This will be a great design to show off swerve drive concepts to the dozens of WA rookies this year.

Looking forward to seeing it go!

To answer some question, we are using a coaxial design for the steering/power shafts.

Our team discussed implementing a traction control system, but we decided that it could hinder the driver’s ability to control the robot, much like the Airbus fly-by-wire systems that have caused pilot/computer “disagreements.”

Aren’t you missing tensioners for your toughbox (or dewalt) chains? Sliding the toughbox/dewalt back and forth won’t work since you’ll have different amounts of slack in both chains. Or am I missing a second set of slots crosswise to the set I can see?

Very nice work 1983! Keep up the great work and we’ll see you in a few weeks.

The transmission is offset from the center of the robot, the chains will be different lengths so sliding the toughbox or Dewalt will tension both sides. If that method does not work, we are planning on making some of our own AM style tensioners for use with 25 chain.

I share the same emotions as Asa: It’s scary how similar it looks to our design as well.

Looks very solid. Do you have a weight estimate?

Best of luck to you in fab.

We are currently assembling the shafts. We are also hoping that we can get the frame welded very soon. Me or other team members may be posting pictures soon.

are you using bevel gears for power?

Yes, there are two bevel gears used for power transfer.

Yes, there are two bevel gears used for power transfer.

I’m curious if your choice of bevel gears matches ours. If you don’t feel like publishing which ones you used, would you mind PMing me?

I would be happy to share the specs, I can post them with a picture of the updated design tomorrow.

A bit of simple traction control might come in handy. Our programmers are working on just using a PID loop in Labview (which makes such things a bit easier) to slowly ramp up wheel speed… BUT… with a “turbo over-ride” button for when the driver wants to put on a drifting demonstration.

I notice that even my “toy” car has a “traction control off” switch on the dashboard for when I want to light 'em up a bit.

We are using a Boston Gear HLK101Y bevel gear. We chose this gear to allow us to swap wheels and drive effectivly on carpet after the season is over, so for use on the FRP it is WAY overkill.

We are using a Boston Gear HLK101Y bevel gear. We chose this gear to allow us to swap wheels and drive effectivly on carpet after the season is over, so for use on the FRP it is WAY overkill.

Excellent, we picked the same ones.

I agree, most strength teams are used to doing is total overkill on FRP. The entire robot will slide before most parts bend…