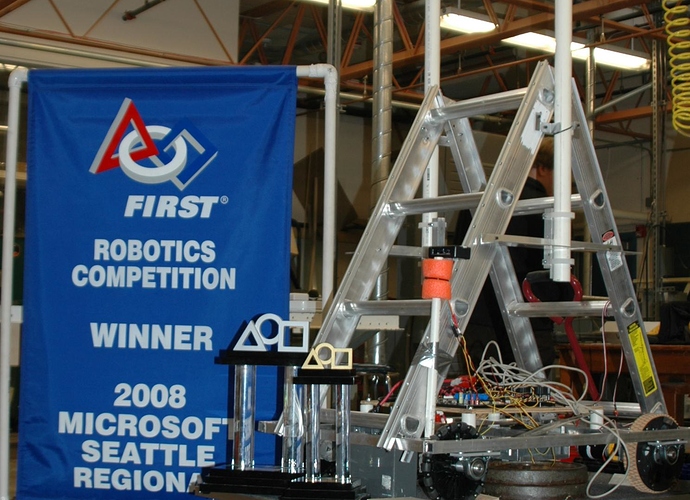 Our new and improved design for Atlanta!

Your use of the ladder was pretty clever. What kind of bearings did you use to make it slide so nice?

Your use of the ladder was pretty clever. What kind of bearings did you use to make it slide so nice?

haha, I’m going to assume that you mean on the real robot… The robot in this picture is just our practice robot and our new pvc “ball-knocker-offer” so that our drivers finally have something to practice with and our programmers can finally work on a hybrid. Anyways, i believe we used the igus slides, and mounted the tracks straight to the edge of the ladder sections. the slides are simply the little plastic things from igus. i was not personally responsible for the construction of that part, so i’m not exactly positive, but I believe that is pretty much how it all goes together. on the outer sides of the ladder sections we have our pulley system. the pulleys are simple plastic pulleys, i’m not sure where we got them, and we run spectron line (commonly used on sailboates) through them to the drum setup which is run by a FP and 550. They are run together, and one side of the ladder/pulley/spectron setup powers up and the other powers down by running opposite directions on the drum. It’s a pretty cool thing to see. We used the same slides for the “tilt back” motion on the ladder for our carrying configuration. If you have anymore questions feel free to ask, and i’ll get some more info from someone that worked on it more than i have!

I do enjoy our new robot… It is capable oh very fast travel specializing in the teleported period… Ok sorry, Portland Joke

What I like most about it is that, that robot would actually be pretty decent in this years game.

LadderBot looks pretty cool. Perhaps you guys could jazz it up a bit and use it for demos.

Well, decent but I don’t think you could win any regionals with it. It’s really just a test bot…the really one did way better. BTW you should never let the operator and the robocoach drive the robot… we had some bad experience with the practice robot! (Sorry Steph and Daniel…I just had to say that…^^)

When the seasons over you could loan that 'bot to some pre-rookies at an offseason so they can get used to having a robot.

you make a good point about loaning the bot out. we were given one by a team nearby that had folded before our first FIRST season last year. It was nice to get an idea of the electronis, and an example of a drive train.

As far as a competition robot, aside from being ridiculously underwieght right now, yeah, it would be a pretty decent rabbit with the ability to knock the ball off I guess. Although, right now, the “knocker” is stationary and would not be within the height restrictions…