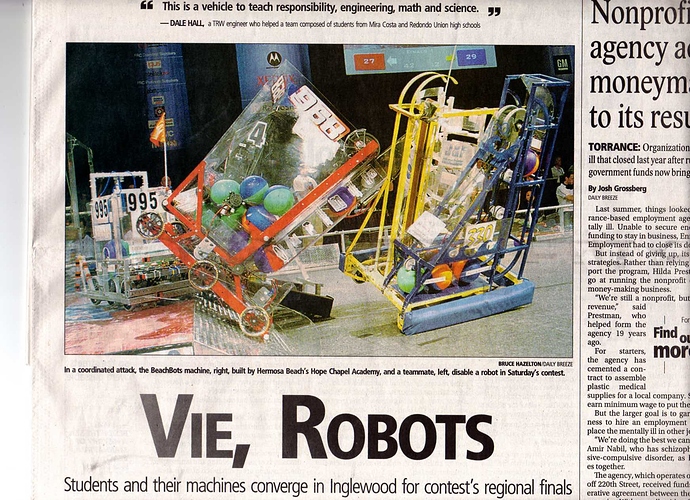 This is a picture of final match 1 at the Southern California Regional, published in the local newspaper, “The Daily Breeze”. Amazingly, in spite of tipping over in the third period, 968 and its alliance scored enough points that the final score was tied 44 to 44. (This was the match for which the officials took 20 minutes before they announced the final score.)
Joshua_May March 28, 2006, 2:11am #2

My god this was a crazy match.

My team was so nervous throughout the entire tournament rounds. At the #15 seed, we were the first back-up team in case of a robot breakdown, and every robot in the red alliance and team #4’s robots all seemed to be in danger of breaking beyond repair, which would have given my team a spot to play in the championship round. Amazingly nervracking, and heartbreaking to see the kids go home without that tournament berth. But it was still great fun, can’t wait until next year when I’ll have more interaction with the team.

My god this was a crazy match.

Finals match “#0” was most definitely a crazy match - one that disappeared from the record. See: SoCal Regional Match Results - no indication that three matches were played in the finals.

There was a LOT of discussion among FIRST officials after match “0”. The RED alliance should have won the autonomous period, but it was somehow (i.e computer error) awarded to BLUE. The Beach-bots must have felt snake-bit, as if a ghost from the Arizona Regional was haunting them. Ultimately, the match “0” score was posted as a 44-44 tie.

The match was a prelude to the intensity of the finals. Even though 968 tipped shortly after the above picture was taken, the BLUE alliance managed to get three robots on their platform. 599 of the RED alliance was effectively held on the BLUE platform by 1138 who had become hung on the top edge of the ramp. Team 4 made it back on the platform just as time was running out to earn the 25-point bonus.

The finals matches were all very hard fought and were very close. At the end, our robot (Team 4) was literally held together with zip-ties. I seriously doubt that we would have survived a 4th match in the finals.

Both alliances left it all out on the field and put on a terrific display of competitive spirit for the spectators. Great fun, indeed!

Note how right off the bat the reporter gets his facts wrong. The quote is attributed to “Dale Hall, a TRW Engineer…” when, well, TRW has been since absorbed by NG.

What an awesome picture! I want a copy - can you tell me where this is from?

Also, THANKS for the amazing competition!!! We knew there was only one bot to worry about…330. You guys always have a quality team and machine, and you seem to make things happen when it’s needed. No one ever knows what change in strategy you’ll pull-off next, making you a VERY scary, fun, and successful team. It’s always a great honor and a lot of fun to play against you. Maybe someday we should try playing together! Now that could be fun…

What an awesome picture! I want a copy - can you tell me where this is from?

That was from Sunday’s Daily Breeze. The article (without pictures) is online at http://www.dailybreeze.com/news/articles/2524706.html?showAll=y&c=y

Finals match “#0” was most definitely a crazy match - one that disappeared from the record. See: SoCal Regional Match Results - no indication that three matches were played in the finals.

The scoring system will not allow tie scores during the elimination rounds to be saved, it makes you replay the match, hence no record of the tie.

The scoring system will not allow tie scores during the elimination rounds to be saved, it makes you replay the match, hence no record of the tie.

Thanks for the clarification. I learn something everyday!

Oh man, those 3 matches were pretty much as intense as they could get. Way to go to both alliances, most fun I’ve had in a LONG time.

That was from Sunday’s Daily Breeze.