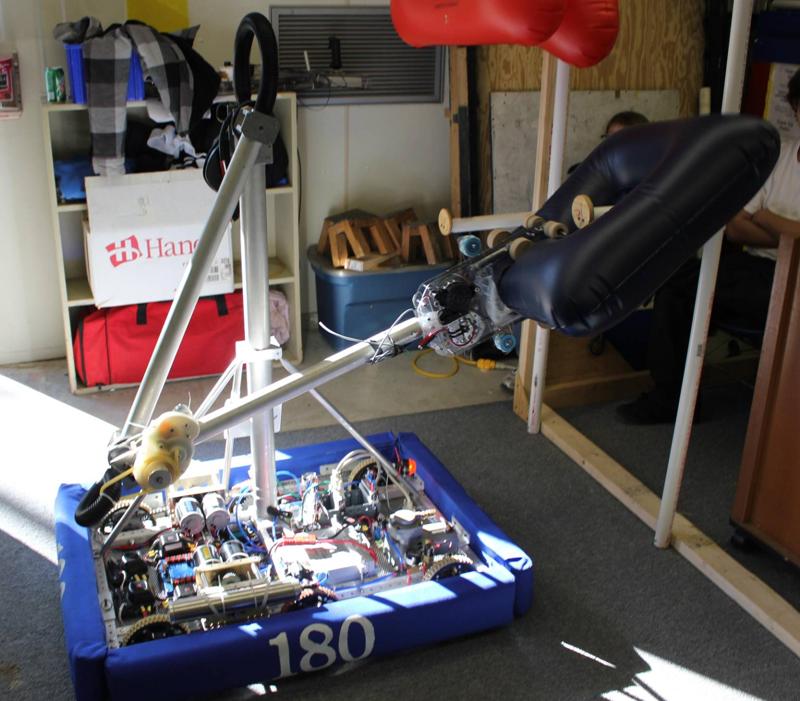 So SPAM fianly did a 6WD. I like the arm. how is it controlled? a puppet controler, or somthing more sofisticated?

The operator selects preset positions and has a vernier for fine control of the elbow.

where’s the big ramp? Oh wait that’s new! Smart move on the kit frame, am’s and plaction wheels. I can’t figure out how to use those FP gearboxes, but you guys do it every time, no problem… Looks good, see you guys in a couple weeks. BTW I think your minibot should wear a superman cape.

Stunning! I agree that there should be a little Spam 180 cape on the minibot! I look forward to see how that arm performs! Thumbs up!

It looks sort of familar…but not…

I love the wiring on your arm! Very professional and ingenious running it through the center as opposed to latching it to the sides.

Do you have any problems with the corrugated tubing at the top when your arm is fully extended? It seems like the tubing wouldn’t like to be bent that much.

Familiar…yep! This is the third year we decided to use a 2-link arm. We really debated the pro’s and con’s of a 2-link vs. a single pivot with telescope vs. a lift. In the end we chose to go with what we already had experience with.

We made a decision in week 1, that a 6wd would work better for us in transiting the field, as we expect some pushing contests in the middle. This 'bot is so responsive, that we have not had alignment issues when hanging tubes. While I have liked the holonomic and swerve chassis’s we’ve built, 6wd has won me over.

We avoid wrapping the tubing, by raising the shoulder counter-clockwise ( in this view), when we reach for the top pegs. For the middle peg we raise it clockwise, but not much above 45deg. So far the tubing has not shown signs of fatigue.
Eric