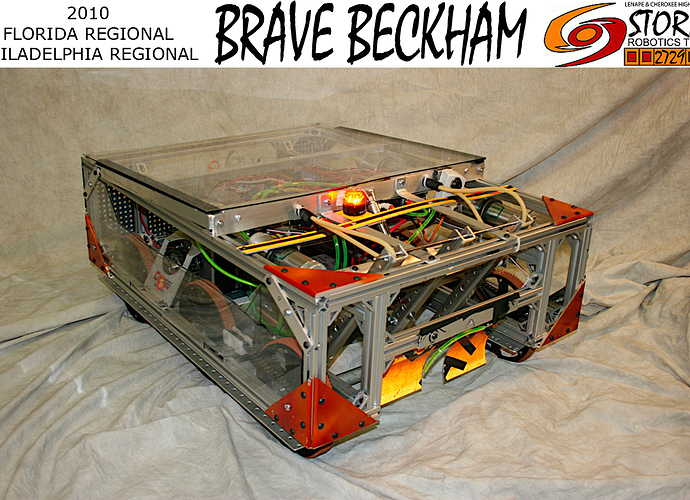 Storm Robotics Team Breakaway design, Brave Beckham. The robot is a tank drive style machine that is able to go over the bump and through the tunnel. It uses a pneumatically power piston kicker system to kick the soccer ball as shown in the video below.

Also, great job to all of the students and mentors on Storm Robotics for designing and building such a wonderful machine. Proud of you all!

Cool! I cant wait to see you guys at UCF!

Those red brackets at the corners of your robot, and the heads of the screws fastening them to the frame, define your bumper perimeter. You’ll need to artificially expand your frame in the bumper zone in order to pass inspection.

What do you do in terms of ball possession? Looks pretty sweet, its a rough ride going over that bump!

This looks like the most robust robot I’ve seen so far. It looks as if it could survive anything!

And is the plexiglass above your electronics attached with velcro? If so that’s brilliant!

1647 was worried about you guys during week 5. Heard from the mentors it was a little strenuous because of the snow. Luckily, we both made it out great. Best of luck in Florida!

Congrats to you and the Storm for what looks to be a terrific bot!

See you in Philly!

Your robot looks great this year.
Hopefully our pit will be across from yours in Philly again so I can see this thing up close.

After the recent nonsense with Mr. David Beckham and the LA Galaxy I would not give him an incredible compliment by naming a beautiful machine after such a pompous arrogant individual.

The flange along the bottom is out of the frame perimeter by a lot. :yikes:

Thanks guys. The robot does not hang, though we did design a hanging system, weight restrictions kept it off the robot. There is no ball possession device build into the robot because we built that ball pusher into the kicker cavity. The ball moves well with the robot, as shown here. The ball pusher is there because we were afraid of running over the ball with the robot’s speed. And yes, industrial strength velcro holding the plexi down.

Thanks for the cheers of good luck guys! We’re all just ready to have some fun at our regionals.

Randy…Yes, I do hope to end up across from 223 again at Philly. Between being across from Extreme Heat and next to the Red Devils it got to be a little hot! Yeah, you just reminded about the whole David Beckham vs. LA Galaxy thing. The story behind the name is that we’re naming robots in alphabetical order starting with this year. So with this being our second year we go with the letter “B”. I can promise that Brave Beckham won’t argue with fans and play for 3 different leagues at once!

The flange along the bottom is out of the frame perimeter by a lot. :yikes:

Yeah, those were thrown on at the last minute after deciding not to go with the hanging system. It is possible that they may end up off the robot or swung around to the inside of the frame after being notched out to fit the t-slot.

Nate, the robot looks awesome. Sorry I couldn’t catch up with you guys when you stopped by to use our practice field, I was too busy helping finish 816’s robot up. I hope the practice helped you guys out though.

Oh well, I hope to see you guys in Philly.

I think the original picture is a slight optical illusion. I beleive the flange you are referring to is the C-channel that sits under the bottom T-slot. I have included another picture that should clear that up. The C-channel is within the same boundary as the T-slot.

You do bring up a good point regarding the frame perimeter and the screw heads on our orange gusset plates. I believe we are ok on the sides and back, because the plexi mounts and screws push out the bumpers to same plane. However, the front gusset plates may need to be removed, because there is nothing on the top of frame to push out bumper to account for the orange gussets at the bottom front corners. Either that or we need to add something to top-front to push out bumper. Lucky for us, the orange gusset plates are extra structural reinforcement and decorative. So removing them, if necessary, is no problem.

The C-channel is fine, but how are you going to get a fully supported bumper along that frame perimeter? On the front, it looks like you’ll be fine. On the sides, there’s a pretty substantial space where the frame isn’t the frame perimeter, but about 1/8" or 1/16" inside. I’d suggest putting a shim in along there to bring the frame out to the perimeter.

I see your point …

M. The entire length of the BUMPER backing must be supported by the structure/frame of the ROBOT (i.e. the backing material must not be in “free space” between or beyond attachment points) (see Figure 8 – 3).

When I first read this rule I interpreted it as large gaps in the frame. But, I guess the 1/16-1/8" gap that we have due to screw heads would also count against this.

We will have to take some shims (as you suggest) to our competition. Thanks for the feedback.