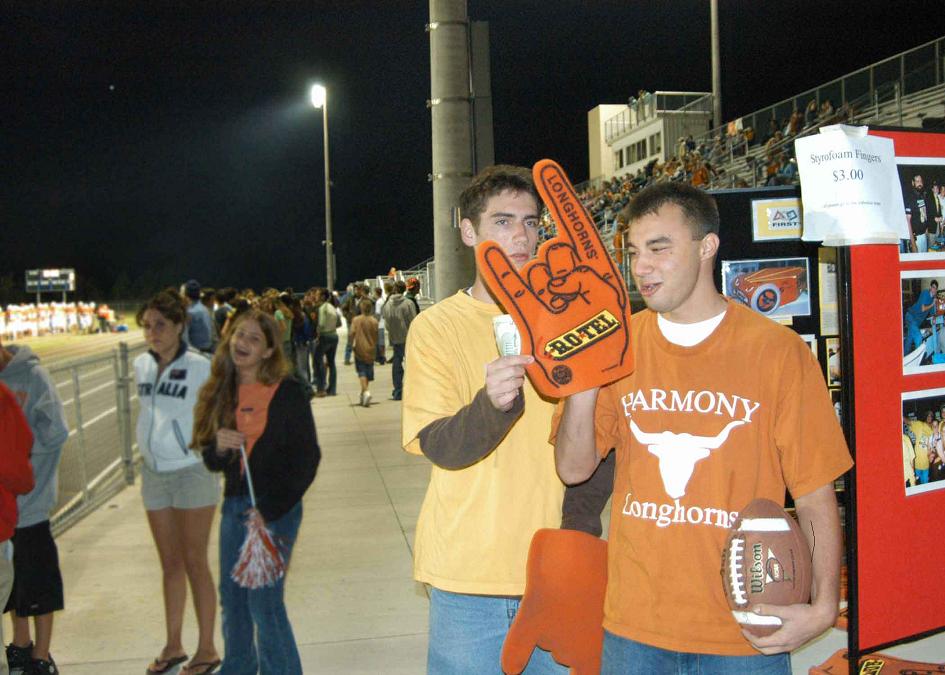 The team had a fundraiser on Friday night at our last football game of the season. We were selling Styrofoam fingers to the fans and parents while helping get the word out to the school that we exist. We had our backboard up with plenty of pictures and many people stopped to look at them. The fundraiser went over very well, we made almost $100 before halftime. Off to a good start!
Tom_Bottiglieri December 31, 2018, 3:50pm #2

Great Idea, i may have to steal it for next year!

Well, Not many. Population of Harmony as shown in my Avatar is 273. The school has I believe less than 1500 students (first year school), and I am one of 134 Seniors. I believe there are only a few seniors on the team, which explains the reason why we didn’t win a game this year. No big deal, I still enjoy them and know this school is destined for great things in the future.

As for the texas thing… Yes… I know, I know… You actually just helped me prove a point I had to make when we were deciding team names. If we called ourselves the longhorns, everyone would think we were from texas, especially if we ever make it to the Championship event at any point in the future. We ended up calling ourselves the Harmony Hurricanes to represent our community and school as well as our state.

As for swearing we were from texas, I was Sooner born and Sooner bred in the state of Oklahoma, and a HUGE University of Oklahoma fan…and that’s all I am going to say about that.

We ended up calling ourselves the Harmony Hurricanes to represent our community and school as well as our state.

great one Barry… i wouldnt have come up with some kind of idea like this. cool idea man.

I think i am gonna steal that idea at some point of time … :rolleyes:

it’s nice that you guys support u’r school!! and good idea–spreading the great word about u’r team—good lucky w/ everything

Ha ha, one thing I forgot to mention. I found out that night the announcer in the press box was Mr. Jones the physics teacher that is going to help this year. I had him announce “The robotics team is selling styrofoam fingers for only $3.00, show your school spirit with giant fingers.”

No one left that game without knowing we were there!

I wouldn’t call selling fingers with “the shocker” even remotely under the umbrella of Gracious Professionalism. It’s disturbing that you would post this picture on Chief Delphi. It’s even more disturbing that your team embraces the idea as a good fundraiser.

That’s not the “shocker”.
The shocker is 3 fingers up. This is only 2.

This is known as “the horns”. Which goes along with the name of their HS team “The Longhorns.”