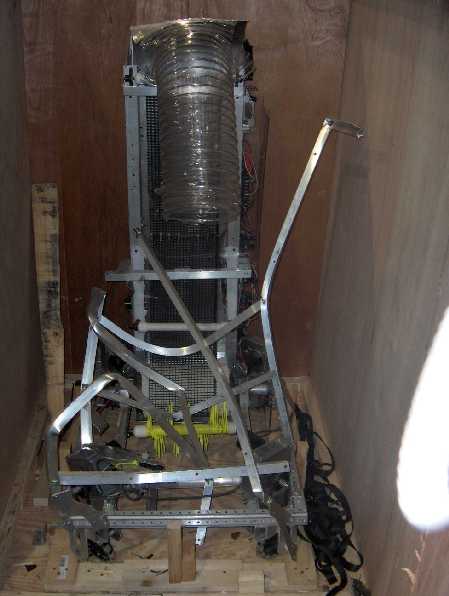 Sometime after crating in Houston, something massive came crushing through our crate lid and wiped out the front of the robot plus the frame and one transmission on the right side. A huge thanks goes out to the two teams who each answered the call for kop frame rails. I’ll post pictures taken exactly 24 hours later.
Joe_Matt December 31, 2018, 7:06pm #2

WHERE DID IT ALL GO?

Did you recieve any contact of any kind from the shipping company?

What did the shipping company have to say about this happening?

What in the world happened!?!? That is insane! Details please!

Who can honestly sleep after being a part of something like this?

The shipping companies are being paid big bucks to safely transport expensive machines that students spend hundreds of hours building, and this is how they treat the crates?

THAT IS A TEAM’S WORST NIGHTMARE! That would leave me speechless and at the same time crying!

OMG! Are you guys getting any sort of reimbursement for it??? Has anyone taken responsibility for it??

First I saw a pic of a robot who’s crate fell apart (and survived) now a pic of a robot nearly obliterated by something crushing it. That looks pretty bad but I suppose it got fixed. Did they mention exactly what caused that damage?

Was the crate actually crushed from the outside or was the damage done by other stuff shipped within the crate? I ask because the visible walls of the crate appear intact and still square in the pic.

Do you have any pics of the overall crate?

Secondhand info here until the Toltechs get back. From what I heard, it seemed like something large and heavy dropped through the top of the crate. And then someone removed whatever it was and replaced the crate top with a new piece of plywood.

ok, so I guess its time for FIRST to either

A. host a crate design contest. Points awarded on cost, amount of weight the crate can support on its top before it collapses, how far it can be dropped before it breaks open, and simplicity of construction. Winning design becomes the standard FIRST robot crate

I think those are a couple of swell ideas, Ken.

ok, so I guess its time for FIRST to either

A. host a crate design contest. Points awarded on cost, amount of weight the crate can support on its top before it collapses, how far it can be dropped before it breaks open, and simplicity of construction. Winning design becomes the standard FIRST robot crate

Yeah Crate design that is robust and light is a challenge. Our crates have been pretty robust for years but the budget reductions have brought us to a point were every once counts. We’ve been looking for some type of lightweight crate that can support another 600# crate stacked on top of it. Right now our robot crate is 277# empty so just adding the robot with the controllwe already makes us over the 400 # limit.

I’ll have to think of something this summer.

Next year, along with all the other robot requirements, they can add:

R073: The robot must be 56" tall when bolted into its crate, and able to support 600 lbs through its frame with up to 2gs of vertical acceleration, for up to 300 hours.

Secondhand info here until the Toltechs get back. From what I heard, it seemed like something large and heavy dropped through the top of the crate. And then someone removed whatever it was and replaced the crate top with a new piece of plywood.

Kevin pretty much has the second hand information straight. Shepard produced a document indicating that the crate was received damaged. I have that report. I didn’t have time to start the process with FedEx until my brain had recovered from the weekend and competition and I could keep my eyes open after the bus ride back to Texas. FedEx’s initial report is that their facility in Tennessee reported the crate had damage when it arrived there. The investigation continues… One can only speculate as to if a jet engine fell off a plane or if another crate slipped off the forklift.

This tragedy makes it appearant that teams must include in their budgets for the coming years estimates for drayage over-ages bills as low cost robot insurance. The championship winners, our pit neighbors, the robowizards have a diamond plate aluminum construction for their crate. Seemed like over-kill to me until Wednesday evening about 7:30 PM.

A bit of catch 22 irony is that SES would not ship our robot back to our school if the crate was still broken. We visited HomeDepot and bought 4 sticks of 2x4s, a box of 3" screws and used the 3/4 inch plywood that SES donated for a new lid.

To answer the question about internal damage. The entire crate exploded outwards when the roof collapsed. The perpetrater put a brand new piece of plywood on the top as it was completely destroyed and then used a 5 lb box of nails to get the crate back into the basic box shape.

This is really unacceptable. Accidents do happen, but from what I have read the shipping company is saying that it received the crate damaged, and you know it was intact when you shipped it. So it sounds like this is a blame game. I don’t think I could take it as well as you have. It it had been my robot, I would really be angry. (There are a few words I would want to add, but I’m not allowed to say them on this forum) :mad: :mad: :mad:

**
What came first: the student or the mentor?**