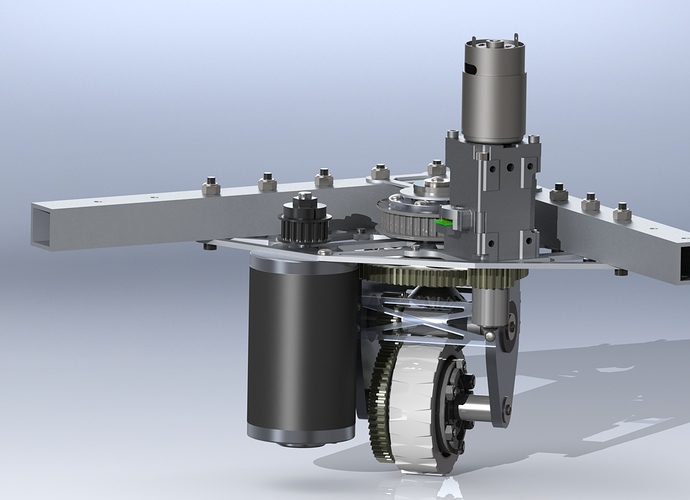 CAD can be found at https://workbench.grabcad.com/workbench/projects/gcaFW2UsMko62pkyqWgTqwQMsoTccy8VDRyF8lsWVke50S#/space/gcDuRMGRReXyDbsOb86ajMXL0dsFJBqbAJGsXLbWx4BbfX

I would really appreciate any comments, concerns, and criticisms you may have.

Interesting module you got there. I like the use of a lazy susan to take up thrust loads from the module; I don’t think I’ve seen that on here before.

Some questions/comments for you:

Apart from that, it looks nice. Solid lower body. Good lightening on the large gear. Not too much to make from scratch. Clamps onto 1x1.

To respond to your questions:

Interesting module you got there. I like the use of a lazy susan to take up thrust loads from the module; I don’t think I’ve seen that on here before.

Thanks, I haven’t seen it eather on here. I saw it on McMaster and thought “hmm…I wonder if I can make a swerve around this.”

The wheel shaft is 3/8" round. I was hesitant to drill a large bore hole in it, but I could probably step it up to #8.

I wasn’t sure what was a good thickness plate to use. My next iteration (if I iterate again) will probably use a less-pocketed 3/16" plate.

Probably a good idea. I don’t actually plan on building it because I aged out last year, but I will look into adding a tensioner to the next iteration.

I chose to use rivets because it meant that I don’t have to rely on tapping the plates or having nuts hidden inside the module that I would need to get to to take it apart. This way, all I need to take apart the module is a clear shot to drill out the rivet. If there is a good reason to use screws instead of rivets, I wouldn’t be strictly opposed to it.

I was planning on using CIM retaining rings above and below the hex adapter to keep it in place. The surgical tubing would just slide over it.

Thanks for all the comments and suggestions. 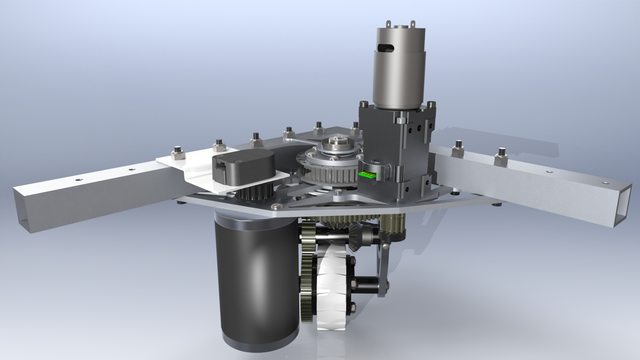 In making changes I realized why I needed rivets and the top bearing. The top bearing is necessary because otherwise the shaft is only constrained by one bearing in the big plate and one in the 84t gear, which can move radially and mis-align the bevel gears. By adding the top bearing, the vertical shaft is now constrained by two bearings relative to the frame and the bearing in the 84t gear will keep the module concentric with the vertical shaft. The rivets are necessary instead of gears because there is not enough room for two screw heads (and certainly not two nuts) to pass be each other between the plates of the lazy susan. The rivet heads, which are shorter, have enough clearance.

That bearing won’t do much if it’s in 16th plate imo. 1/8th might be safer. Looks much better than before, although I would still test to see if it holds up before a seasonal use.

On grabcad I only see the .sldasm, is there another link to download all the .sldprt files?

On grabcad I only see the .sldasm, is there another link to download all the .sldprt files?

You should be able to see everything through the built-in GrabCAD 3D model viewing plugin. For good measure though I just added a Pack-and-Go and STEP versions so you can download and view in your own program.