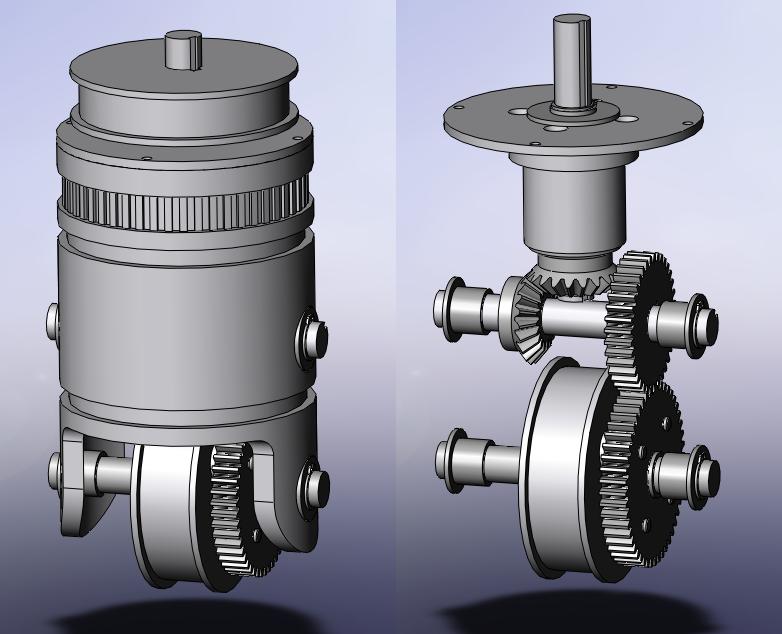 A concept swerve drive can I modeled up on SolidWorks. It rotates on two 1/4" HDPE plates, which fit into the two grooves on the can exterior. The top pulley in the left image drives the wheel via the miter gears, and the timing pulley pattern on the can exterior would turn it. The wheel is 3" diameter.

PLEASE give feedback, comments, questions, or whatever, as I posted this to see what people think. The goals are to keep it simple, functional, and CHEAP. The two main reasons we would not do this would be cost and build time.

I’d suggest you send a PM to Steve Greco (sgreco) from 2079 on here. They used this set up in Lunacy so you’d be able to get some great feed back from them. Their modules were pretty sick.

I’d suggest you send a PM to Steve Greco (sgreco) from 2079 on here. They used this set up in Lunacy so you’d be able to get some great feed back from them. Their modules were pretty sick.

That’s where a lot of the inspiration came from.

I’d be more than happy to give you some help if you need it. Feel free to PM me.

I’ll point out a couple places that my team had issues just so you don’t have to run into them.

The machine time is kind of intense on these things. It makes life a lot easier if you have access to a four axis CNC, because otherwise you have to turn the wheel module x number of degrees before each cut on the cog belt, and it probably wouldn’t be incredibly accurate. Once the CNC program is written though, my team found it’s pretty easy to make a bunch. My team had 100 teeth exactly so it made the math kind of easy. You probably won’t need that many because I’m guessing that’s a four inch wheel. My team 6.5" OD stock, which, looking back was probably a little too big. (we still have about 15 feet of the stock).

The structural integrity of a cylinder is typically stronger than a traditional square module, so you’ll find that you can make the walls pretty thin, like 1/8 maybe even 1/16. You can take out a lot of weight between the two grooves.

The hardest part of these things is the machining, once that done, you’ve probably done about 70% of the work.

The other thing about these is that you’ll find the friction between your HDPE and the aluminum module is actually quite a lot. If my team decides to do the design again we’ll likely put in some type of delrin inlay in the module to reduce friction. Make sure your frame is really accurate surrounding the module, on my teams front left module, our frame was off by 1/32 of an inch form one side to another, and that bent the delrin plate a little bit. That 1/32 of an inch increased the friction exponentially. When you mount your HDPE plates to the frame make sure you slot the holes, because you’ll find that it is incredibly helpful to be able to adjust them to take off friction.

After my team got these machined the only thing that we had to worry about was friction between the delrin plates and the aluminum module.

You will have to buy stock that has thicker walls than you want because you will need to cut it down to ensure that it is perfectly round. My team did a prototype on a manual lathe, where we had it round to the nearest 10 thousandths of an inch. Then on the real ones that were CNCed we got it almost round to the 10,000 and we could really tell the difference in the amount of friction.

It’s hard to get the cog belt pattern perfect, but my team found that you need a pretty solid and reliable tensioning system, typically 90 degrees of wrap won’t be enough. (It does sort of depend though).

If you make it for a build season make sure you finish early, because these things look beautiful anodized.

Here’s a link to some pictures of my team’s swerve this year. The only reason the CIM is mounted direct is because we wanted space for other things. The modules on the robot weren’t ever anodized, we ended anodizing after the build season.

Your design looks really great though. Really nice job. My team is willing to help if you need any advice or anything on the design, so fell free to PM me or whatever and I’d be happy to help.

Thanks for the feed back about the friction issue. We weren’t thinking about how accurate the plates needed to be.

What is annoying about cad is that it can be hard to see the scale of things when they float in a vacuum with no references. The can OD is 3" and the stock is .25" wall. Attached is a more realistic view of how the finished product would be used. The chassis tube is 1x2" aluminum tube and the top of the tube would be about 5" off the floor.

I thought about doing something similar to this, but decided not to because it seems like a lot of work on a lathe.One question, how do you get the HDPE plates into the grooves?

I thought about doing something similar to this, but decided not to because it seems like a lot of work on a lathe.One question, how do you get the HDPE plates into the grooves?

I can’t answer for them, but I’m guessing they’ll make 2 plates and have them each come in form the sides, that’s what my team did.

The lathe time on these isn’t actually that bad, it’s the mill time that’s killer. I would say over 90% of the machining that goes into these is in the cog belt pattern. It really requires a CNC though, because it has to be really accurate. You need four axies to make the cog pattern though, I’m not sure it’s possible on a standard 3 axis mill. My team’s may have taken longer because we didn’t just make straight cut for the cog teeth, we had chamfers on tooth to create a crown to better grip and retain the belt, we found we had much better grip than a standard staight cut, I guess it isn’t necessary though. It did add to the machine time significantly though.

I can’t answer for them, but I’m guessing they’ll make 2 plates and have them each come in form the sides, that’s what my team did.

Yes, we intended to use two pieces of HDPE or Delrin for the plates.

Currently we have an offer from our local community college to machine some parts. Ethither that or we would look for a machine shop to do the work.