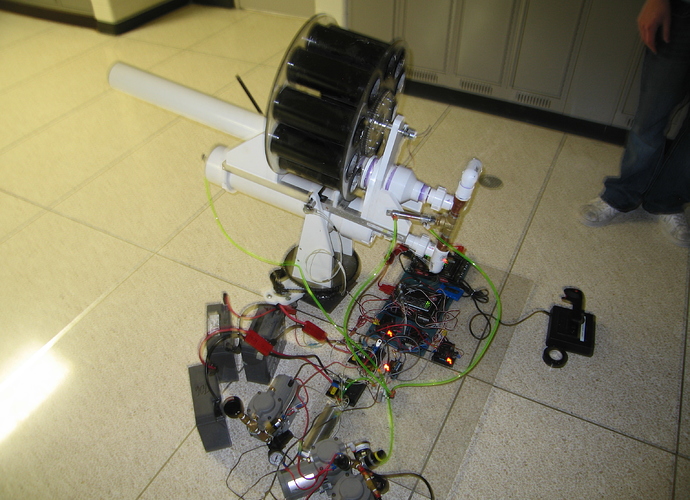 Nice revolver! That’s something we wanted to add to our t-shirt cannon but never got around to doing. We were worried about air leaks where the revolver seals on the barrel… do you notice any issues like that with your set up? I like the use of 3 compressors too, how long is the shot to shot recharge time?

Very cool project, hope you get it mounted on a base soon and start shooting some engineering-enthusiasm into crowds.

EDIT: oh yeah, pvc and exploding and all that… someone’s bound to go into more detail later in this thread

sweet!! how did you guys get revolvers’ chamber to rotate? or is it manual?

Thats awesome…good work!
Hopet that you can have some fun with that later in the season, good choice of an offseason project!

forget a chassis!!! i want that thing shoulder-mounted!!!

I see so much WIN in this picture… I want to cry.

got to do something with all that old equipment laying around.

An yes that is amazing.

alright i’ll try to answer the questions in the order they arrived:

1.The revolver hasnt caused any leaking, the chambers are slightly smaller than the barrel itself and are mounted to a single piece of acrylic. Also, the parts were all CNCed so they fit together extremely well. Theres a switch at the bottom of the revolver that will stops it each time a new chamber is lined up. Since the chambers are cylindrical, the switch will only trigger at the absolute lowest point on the chamber (which also happens to be the center).

5.You can load tshirts in any chamber thats not in the barrel. You just shove the tshirt in any of the rotating chambers that you can get to. Normally the revolver spins only when the cannon is shot, but we also put a loading button on the joystick so we can cycle through the chambers to load them all. When we’re firing, i mentioned the switch below the revolver earlier. After each shot, the revolver spins until the bottom of the chamber triggers the switch. If anyone’s interested i can post the code

at the moment we have two chasis for consideration. We are either going to build a new chasis with tank treads or possible 6 wheel tank drive, or steal the chasis and crab drive from our lunacy bot (with much bigger off road tires of course) I for one am voting for the tank treads

Rule #1 when making air cannons is do not use PVC.

There are huge safety concerns with PVC, because PVC IS NOT DESIGNED TO HOLD ANY KIND OF COMPRESSED GAS, AND HAS BEEN BANNED BY OSHA FOR USE WITH PRESSURIZED GAS IN INDUSTRY. PVC has the awful tendency to spontaneously explode when pressurized with any kind of gas, even if that pressure is below the maximum pressure stamped on the pipe. (The max pressure rating for PVC is ONLY for liquids, such as water).

On a personal note, one of my friends had a PVC air cannon explode while holding it a few weeks ago. He wasn’t even moving, and the air cannon didn’t hit anything. He was just standing there, holding the pressurized air cannon, when it spontaneously exploded between his arm and his body. He was very lucky in that the way the shrapnel flew out, nearly all of it missed him. His jacket on that side of his body was not so lucky, and literally was torn to shreds.

Since this air cannon is being shown as for “marketing”, it seems like it would most likely be used at public appearances. In order to protect any innocent bystanders from possible exploding PVC shrapnel, I would seriously urge your team to avoid using PVC on the air cannon at all costs.

I agree with the concerns about the PVC, but, is there an alternative that would be anywhere light enough?(not metal)

I’ve seen 400PSI rated ABS blow a hole in the ground at 60PSI when a cannon of mine fired, not a pretty site…

overall, the only solution i have found is to wrap the whole thing in Molecular Bonding Tape (adheres to itself on a molecular level giving a shock strength of 1500PSI) then again in duct tape for appearance (and cachage of schrapnel that gets through the molecular tape)

after that, i’ve gone to metal for most of my cannons… since it’ll bend, not shatter if it has to…

Do you by any chance have Inventor drawings of this???

I’ve been working on a similar project,but haven’t gotten the revolving part down quite yet…

so are there any drawings of this thing out there that you would be willing to share with other teams. I would love to look closer at it.

i totally agree about upgrading to metal though. the last tater cannon we built was air powered and we actually had a remote firing system on it so that we could be in the barn watching it incase it blew up.

Since you have access to a CNC I recommend Using a Geneva Drive to index the chambers. We have some experience with one and it works well if manufactured to close tolerances and well lubed.

i’ll talk to one of the mechanical guys and see if we can get some drawings out on the internet (they lock me in a dark closet and make me write code all day). As for the exploding part, the only part of the cannon that holds pressure is the air tank on the bottom of the barrel, i’ll see if we can get that replaced with a safer material, all other valves, pipes, ect. are metal.

sorry the video isnt that great, we finished the cannon right before build season. the website isnt quite up to date either.

If you’re concerned about weight of using metal, don’t forget that only your pressure reservoir needs to be metal. If you store your air at 120psi (or higher) you can get away with quite a small reservior.

I knew we would get some warnings about the PVC. We have 2 GE engineers on our team and they don’t see how this PVC can be a problem. We did not buy the cheap unrated PVC from Manards, this is all pressure tested and pressure rated PVC. The 3 in dia reservoir is rated at something like 320 psi. Don’t remember the exact spec but it was WAY higher than the 60psi we intend to carry at max. I was thinking about wraping it in fiberglass cloth and epoxy just for safety but I realy don’t think it is an issue. I can’t help thinking that the accidents have been caused by using the unrated pipe or overpressurizing it. Any way. The chambers are gasketed at both ends with a spring loaded deal that seals both ends of the chamber. We do get a little leakage here but not much. I think at max elevation and 60 psi we could launch a rolled up t-shirt about 200 ft. Thats a guess as we have not tried it outdoors yet but it hits real far up the wall indoors.
Bruce

Before I really got involved with FRC too much we had actually built two different potatoes cannons that used air pressure. We were doing a very similar design only difference was that our barrel actually went down through the air tank but we were easily pushing 100 + psi into the 4 inch air tank with no long term issues. Again though we were always careful to make sure that we were using at a very minimum schedule 40 PVC and in most cases used SCH60 pvc so that we would have at least a 3x safety factor on our intended PSI and the max we could do.

So what also has me extremely curious is how do you fold/roll the Tshirts so that they come out of the barrel and stay somewhat together on the way to there intended target and not just unfold and act like a big sail/parachute and come right down to the ground?

Fold them in thirds the long way so they are about 10 inches wide then roll them up. Secret weapon…rubber bands.
Bruce