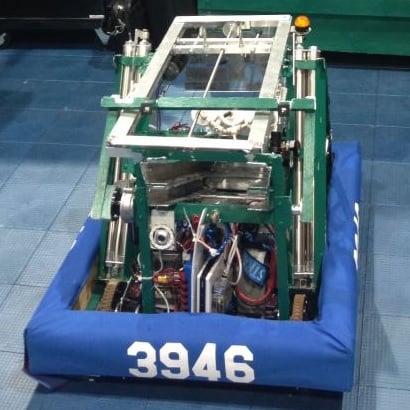 Our 2013 robot. It had a very accurate frisbee shooter (from within or near the pyramid) auto-aimed with a camera. The climber was capable of a 3 rung climb, but we had no pre-competition practice with it and never successfully used it in a match (usually started way too late). Suffered from TRS (Twitchy Robot Syndrome). Our robots since then have been more robust.

2013 - Ultimate Ascent. Put frisbees through goals, and climb the monkey bars, one rung at a time. Double Bizarro.

The first two days of build season were basically spent figuring out how a robot could launch a frisbee in a 112" frame perimeter - the online frisbee launchers we found needed a whole lot more elbow room. Also, the robot should preferably be short enough to limbo under the pyramid for an inside climb (which was obviously easier than an outside climb, once we figured out that the conveyor belt plan broke the rule that you could not contact more than two levels of the pyramid at a time).

Fortunately, this was the inaugural year of Robot in Three Days. I don’t recall the details of their shooter, but it featured a wheel on one side and a “wall” on the other, which was enough inspiration to get us into gear.

Remembering lessons learned from 2012, we decided not to do floor pickup, and to prioritize scoring goals (in the high goals) over the climb. Mindful of weight, we went with a welded aluminum chassis that year with the chassis work taking place in mentor Bruce’s garage.

Team Foundation was worried first and foremost about getting frisbees into the high goal. The photo is looking right down the over-under barrels of the shooter. Frisbees were loaded into the upper barrel, slid down to the back where the baffles had been removed, to form a stack. A pneumatic mechanism (more on this later) would then push a frisbee up into the AM 8" pneumatic* wheels, which were located on the right side of the robot (left in photo) and extended slightly into the lower barrel. The first wheel was run at about 70% speed, the second at 100%. This was our initial guess based on giving the frisbee the same amount of energy from each wheel; trial and error proved this to give good results, both in terms of consistency of launch and the amount of sound & vibration produced. After putting in some teflon plates along the upper channel (both to reduce friction and constrain the frisbee a bit), we were putting frisbees in an ellipse about 4" high and 9" wide - much tighter than needed to make high goals. A new addition to the programming team programed a rasperry pi to process camera output and return the size and location of the goal. Once we got the goal in the right spot on the camera, we were solid making high goals. We managed to get this dialed in prior to bagging.

The arming mechanism (that is, that which lifted a frisbee into the wheels) was a piece of slightly bent aluminum bar mounted to the end of the rod of a 3/4" pneumatic cylinder. It pushed on the inside of the leading edge of a frisbee, reaching up from underneath. It worked well in many test launches at the shop, but during competition it started getting buggy, and eventually jammed completely in our final qualifying match. We were not selected to an alliance, but we were on the short list for alternates, so we struggled in the pits to fix it, but after the semifinals started we threw in the towel. It was over a year before we mustered the gumption to get that working again.

The loading mechanism would jam whenever we had more than two frisbees in at a time (the rules allowed four). We resolved this by including a “check” mechanism low in the loading barrel. We would load two frisbees, drop them through, then load two more. The check mechanism consisted of some FLL wheels driven by a PG gearmotor, mounted low enough to catch the frisbees but high enough that we could run the motors and let them through.

Knowing what I know now, the drive train was simply an embarrassment. On the front, (under the high end of the shooter) we had two AM 6" plaction wheels with wedgetop tread (ok so far) direct mounted on CIMple boxes with a single CIM on each, yielding nearly 30fps free speed, 24 adjusted – **way **too fast. On the rear (where we had very little space around the shooter) we had AM 6" omni wheels. Idle omni wheels. Not surprisingly once you draw a free body diagram, when making the long run from one end of the field to the other we made much better time and had better control in reverse than forward.

Team Climb (which I mentored) was obsessed with the 60 point (3 rung) climb, and having to work around the frequent unannounced foundation changes, had quite a job of it. The primary lifting was done with the four large (1.5"x20") pneumatic cylinders, two on either side. Each cylinder was mounted to its mate with two 2-hole mending plates, with the cylinders facing opposite directions. This enabled the length of the unit at full extension to be nearly triple the compressed length. The downward-extending rod was mounted to the lower chassis. The pair was located in a cage made of angle aluminum with a felt lining which kept it from rotating while allowing the cylinder bodies to slide up. The upward-extending rod was a hex non-rotating rod terminating in a hook machined by NASA. This unit was reclined at an angle similar to the slope of a pyramid face. The upper cylinders were powered through one solenoid valve, the lowers through another, making this a “three position” hook. There was also a “railcar” on top of the robot driven by a lead screw (OK, threaded rod) with two hooks which also engaged the pyramid horizontal bars. These came forward until they were directly over the robot CoG to get the front wheels off the ground.

There was also a window-motor-placed “deflector” which pushed the rungs clear of the bumpers; the green bar across the top is part of it. Like the finally successful bridge tipper in 2012, the window motor put the deflector in place, but mechanical stops did the job. Multi-rung climbing was a complex ballet that we never did get working. The climb was going to use a lot of air, so we had 7 white clippard tanks; scary in retrospect. We would have scored more points with a 10 point climber which worked than this 30 point climber which never worked.

The control system was an afterthought, stuffed into every available nook and cranny of the robot, starting low and working up (which mostly meant under the shooter barrel). Our wiring lead that year described controls layout management as “3-D Tetris”. We had so many loose connections, leaks, half dead batteries, and left-open vent plugs that the jammed arming mechanism was misdiagnosed as a control problem until the very end.

In 2013, we used bumper covers (IIRC the base bumper was red, and blue was a cover). The one time the climbing mechanism got all of the robot wheels completely off the floor, a pulled-loose bumper cover was dragging. :o

Green paint on aluminum. Yuck. Looked so-so when fresh, and horrible after 10% of it had peeled off.

*Yes, fast-spinning pneumatic wheels. Wouldn’t do that today as I’ve heard of “marshmallow” wheels, but solid wheels would not have engaged the frisbee for very long.

Our wiring lead that year described controls layout management as “3-D Tetris”. We had so many loose connections, leaks, half dead batteries, and left-open vent plugs that the jammed arming mechanism was misdiagnosed as a control problem until the very end.

That’s “4-D Tetris”. Not only were we trying to stuff the controls into extremely narrow spaces, leading to use of vertical boards as horizontal boards, but every 2 days or so changes where made as to where structural parts of the chassis would be, leading to required total redesign of the controls layout, and with each subsequent re-design, less effort and consideration given, and more “just fit it in” mentality.

Team Climb (which I mentored) was obsessed with the 60 point (3 rung) climb,.

So the 3 rung climb was 30 points, then with the maximum colored disks allowed would net you an additional 20 for a 50 point climb. So unless your team was obsessed with climbing with an illegal amount of disks you were not getting a 60 point climb

So the 3 rung climb was 30 points, then with the maximum colored disks allowed would net you an additional 20 for a 50 point climb. So unless your team was obsessed with climbing with an illegal amount of disks you were not getting a 60 point climb

Right, 30 points. I probably crossed my memory up with the fact that it was 60 inches, plus the size of the rung.