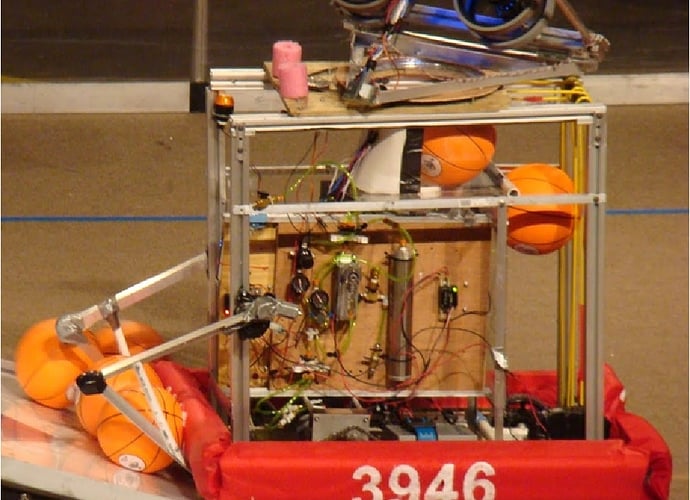 3946’s rookie robot. Way too many features for a rookie team. Intended as a defensive robot that would cross the bridge, get in the way, and lob balls back at our side of the court. Reliable pickup and ball management and a turreted four-wheel shooter that could easily make full court range (though making a goal would have been a victory of prayer). We massively underestimated the force required to tip the bridge; AFAIK, this is the only time we managed it, in our last match at Bayou. SO MANY SPEED HOLES.
Turret Concepts
Zook January 1, 2019, 3:11pm #2

R.1307 - All rookie teams are required to have at least 1sqft of plywood, as viewable by a reasonable astute observer, on their robot at all times.

As I realize that in two months, I shall be one of only two persons on 3946 who was (fairly) regularly around in our rookie year who is still (fairly) regularly around. It’s [past] time to write down what we did each year, and what we learned (or should have learned) from it. By posting these to the discussion about the TBA images, future team members should be able to easily find the info, and anyone else is welcome to read as well.

As noted above, this was our rookie robot. We had two FRC veterans, Jesse the head coach and one student (his son). We built the (c-channel) KoP chassis before we had any idea what we were going to build on top of it. The wow factor of a rotating turret was irresistible (or more precisely, we failed to resist it).

The early strategy decision was to build a largely defensive robot. We would cross the bridge, get in the way to the extent we legally could, and toss the balls back to our side of the court when we couldn’t.

For the drive train, we bought the shifting upgrade to the KoP chassis. I was not around for the discussions, but I believe the idea was to use high gear except in pushing contests.

Ball pickup and management were integrated into a single mechanism, with polycord on one side (top of pickup, front of riser, top of feeder) and a wall (lexan?) on the other. This is at the right side of the photo. It took a while to get a single ball all the way from floor to launcher, but we planned to do a bunch of pickups followed by a bunch of launches. This was certainly the most reliable part of the robot. The only real issue with the pickup was that we cut a gap in the front of the chassis and did not provide proper support to compensate for the missing member.

Ball delivery from the storage to the launcher was achieved with a pneumatic piston. Good choice, but we used a 2" behemoth (clearly visible in the photo) which used much more air than it should have. Fortunately, as long as we had enough pressure to activate the pilots on the solenoid valves, we had enough to lift a foam basketball. The ball carrier was a PVC schedule 40 end cap (about 4"), with plenty of lightening holes.

And yes, we did make the turreted wheeled shooter (about 240 degrees of rotation). The ball feeder pushed the ball up through the center of a lazy susan bearing into the gap between four 8" 2010 wheels. And OBTW, those wheels had some custom-machined weights (Larry, a NASA engineer mentor got this done for us) bolted in. We could easily throw a ball the full court length. We eventually removed some if not all of the weights, as we could never actually sink a shot at long range, so it made more sense to just ensure we got it to our side of the field.

The bridge operating mechanism was originally a piece of fiberglass attached to a window motor, operating at a lever arm of something around a foot. This was no where near enough force to tip the bridge (we had the gearbox of at least one window motor disintegrate on us), so during competition, we built the more involved mechanism shown in the photo A window motor still lowered it into position, but the bridge lowering force was provided by the drive motors rather than the window motor.

Fortunately, in 2012, stop build day was Mardi Gras. The reason this is fortunate is that we had all day Monday and Tuesday to work (schools are closed, many businesses shut down and even federal offices are at half staff because so many people take leave). We had to take about 20 or 30 pounds off of our heavy 80-20 frame. We had dremels and drills and reciprocating saws going for several hours to make weight. We removed the turret and roboRIO and bagged the rest within seconds of midnight.

Competition: The highlights are the photo (one of the very few times we tipped the bridge) and when we pushed an alliance partner with too-slick wheels onto the bridge so they could balance.

Oh, also - don’t bother clicking on the 2012 videos linked on TBA to see us in action; they are from a completely different regional.

Yes, Yes we did! Both of the control boards, and IIRC, boards both above and below the lazy susan bearing were plywood.