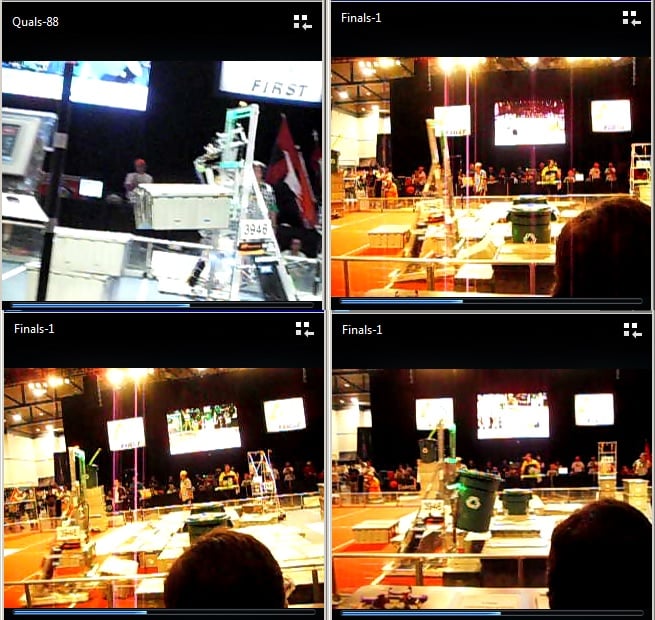 Now that I have left 3946 (for reasons having more to do with the school than the team), I am confident that there are no “regular” members of 3946 who were also “regular” in 2015, and none who are regularly posting on CD in any case, so I’m continuing the 3946 history series linked to the robot pictures I uploaded.

We had a significant number of student leaders graduate or gafiate (Get Away From It All) after 2014, so we did a robo-camp in summer 2014 playing a game involving foam cubes and robots with a maximum size of 18" square before bumpers. Attendance was spotty, but we did get to play the game. IIRC, Anonymous defeated the Jazzy Hippos. We also spent some time that summer getting the air cannon working, and we brought it to all the home games, with a recruiting message.

Jesse Hobson was also talking the team up to underclassmen he was teaching, so we wound up with over a hundred interested students on a team which had never had over thirty student members, and that crowded the build space. We were also mentor-limited to about 50 students, so we held tryouts to select team members. We had a wide variety of mini-classes and tests of skill and drive. About 35 or 40 students did not complete the tests, and it was not too difficult to get down to about 50 students by eliminating those who did not apply themselves to the challenges, or were a distraction to others. Spirits were high, the team was huge, but student experience was limited.

The mentors decided to adopt a somewhat different strategy/top level design process - that students would develop ideas, and pitch them to the mentors for feedback, and ultimate selection. The design selected was a holonomic drive train and a single elevator. As it happened, we had NOT opted out of the kit chassis, so we decided to use the AM14U2 and adapt it into an H/slide drive. We ordered a second chassis from AndyMark, a mess of the new duraOmni wheels, and some more TB-minis at 8.45:1 - we figured that we might as well standardize on one gear ratio for the whole robot to simplify spare parts.

The plan for the lift was for it to somehow grip the lip at the edge of the tote, rather than having a forklift. Ideally, this same mechanism should be able to lift an upright RC (recycle container). Mikey, one of the group we had come to call the gorillas, came up with an idea to mount a bunch of machine screws on springs about 1" apart which would grip under that lip. Any screws which happened to hit one of the flanges would simply collapse, similar to a contour gauge. The concept went through several iterations, but we had a working gripper on a working chassis (excluding the transverse drive wheel) about four weeks after kickoff. We had a great driver selection competition - with two drivers ending up “too close to call” exhibiting complementary skills - Tanner better at getting upright totes, Brandon better at inverted totes. We were early enough in the process, and had built a second robot, and the robot was rather robust for the challenge, so both got plenty of practice.

The driver competition also revealed a capability we hadn’t really designed for - that of “flipping” inverted totes. During the drive test, Brandon really attacked an inverted tote with a downward stroke of the lift, turning it 90 degrees, then again, turning it upright so that Mikey’s “fingers” could get a grip on it. However, during the drive practice, he was rarely able to achieve this. I decided to watch what was going on, and realized that as the attack was more measured/less frenzied than the original competition, there simply was not enough friction between the bottom plate of the lift and the tote. We put a bit of foam tape down there, and things improved greatly! I alerted the pit crews that this was something that should be checked with each battery change during practice and between matches at competition.

During driver practice, we learned that we could pick up two totes simultaneously from the ends (see the upper left image above). This was really great, as we were unable to reliably build or carry a stack more than one tote high - our “finger” mechanism allowed us to grab totes on any alignment, but did nothing to help us line up a stack.

Our real weapon that year, however, was our drive coach, Taylor. Even though we had to make bunches of runs to make a stack and as a result did not seed very high on Friday, she actively worked the leading teams to determine/solicit their needs in an alliance partner. She learned that 3937, Breakaway, was likely going to need a second selection who could deliver an RC from the step to be able to create an additional “RC-capped” stack. On Saturday morning, our strategy was not to win, but prove our capability to mine the landfill to gain access to, and then deliver, the far right RC. We did this both matches.

The #2 team, 3937 (Breakaway, Searcy AR), selected 3039 (Wildcat Robotics, Destrehan LA) at #10 and 3946 (Tiger Robotics, Slidel LA) at #42. The next hour is a blur I will likely never forget - strategy meetings in our pit, 3039 wanting to cheesecake us with a pneumatic grabber, we politely declining because we had no experience with pneumatics under the then-new control system, and 3937 concurring. They decided we should play with what we brought.

We played every match on red carpet (meaning that we were the higher ranked/scoring team), and won the regional! Oh, wait - we had not brought a bag or tag, and only I had even given any secondary thought as to how we would fit into a crate. Team 1912 graciously provided a bag and tag, and we figured out how to detach the upright to fit the diagonal into crate dimensions, and were able to bag at Bayou within dimensions we could fit within a crate.

A week or two before Bayou, we had taken delivery of a 16’ trailer purchased courtesy of a grant by Ingersoll Rand Foundation. We had the hastily improvised graphics replaced with an awesome wrap before heading up to St. Louis for championship.

CMP was a great experience, though we didn’t do well in competition. As far as I’m concerned, the opportunity to attend one of Karthik’s strategic design seminars with the majority of the team was worth every penny of entry fee and travel dollars. It was also a great family experience I’ll always treasure.