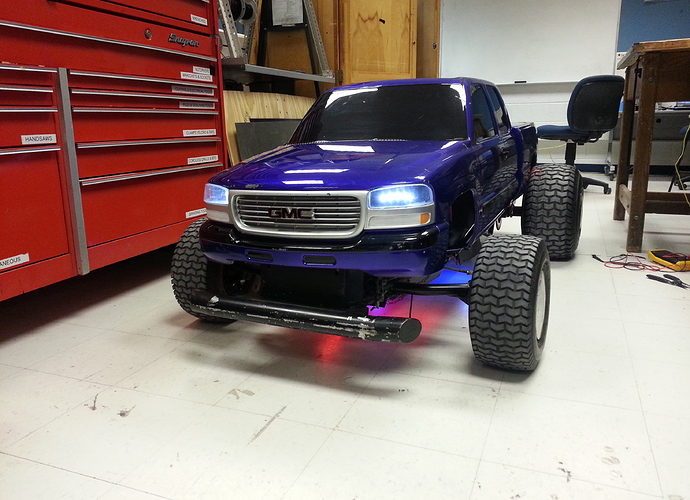 Some of you older mentors may remember this Go Cart from years past. It used to carry our robot to our matches (however, we can’t use it anymore. Not only does it not fit through most doors, but it violates rule 4.13.3 of the Administrative manual; it has a fire truck siren inside). It runs off of 4 6 volt Golf Cart batteries wired in series. The drive motor runs off of 24 volts, and there is an additional 12 volt circuit to power lights and the siren.

It isn’t in that great of shape; it could use a new paint job, and the batteries are old and corroding. We plan on completely overhauling it in the off season this year. There are different shells we plan on painting differently (shell meaning the body; there is a bed and cab section. The bed opens to reveal the electrical system, and the cab opens to allow the operator to get in); one blue and one red to represent the colors of the two schools we are associated with, one orange to use for demo purposes, and the other to possibly offer to the powder coating company we are sending it to for them to use as signage for their business. We would switch between the shells at different events (homecoming parades and demonstrations at sponsors).

It currently has underglow, and a couple other students and I installed led strips in the headlight places to use as, well, headlights. We also have orange and blue strobes I am currently designing a mount for to put on the roof of the vehicle to serve as a light bar.

Do any of you have any suggestions to offer for something cool to do to it? Any thoughts would be appreciated, and possibly used!

I remember it from when 68 came to Palmetto back in 2006. It spent a lot of time in the corner there too.

We’ve got first-hand evidence that truck carts can work these days; theirs is pushed from behind and has a much narrower track width. Short of going for the 2014 Sierra shell instead, I think you’ve hit most of the use cases.

Unless, of course, you find a way to put Super Cruise on it.

(How do I nerd out like this? I work at a GMC dealer.)

I remember it from… Galileo division 2003. As I recall, there was some trouble with it going up ramps, or rather not being able to pull its trailer up the ramps. (Then again… Dem ramps. Ouch.) And it was used back then. Just not on the ramps.

If the trailer’s still around, maybe rig it with an electrical system too, to match the truck…

If it’s no longer used for towing robots, swapping for better batteries and a more powerful drive motor would be cool. Add a couple of speakers to it so that when you press the horn (or another button) the speakers play a loud V8 rev followed by a thunderclap. That would be a great way to give it a grand entrance to any demonstration.

For those of us that have never seen this in action, banana for scale?

I remember this from Phoenix, 03 I think.

For those of us that have never seen this in action, banana for scale?

That multimeter on the right is close to the size of a banana.

Also, that is pretty cool in general