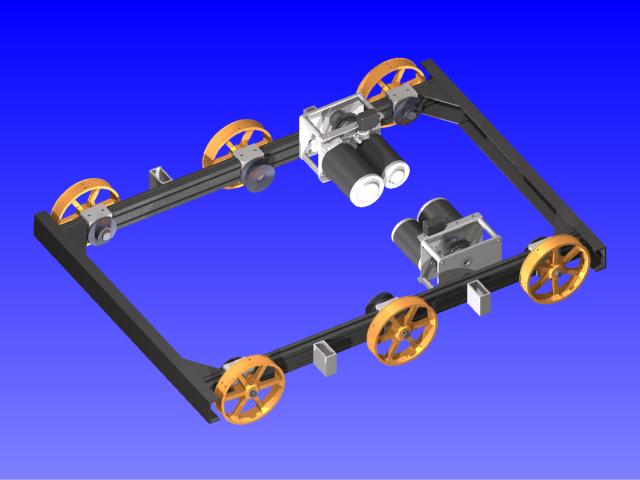 This is our prototype drivetrain for next year. We have discussed this design a great deal and have added many improvements, but I am looking for outside opinions and criticisms.

Last year’s drivetrain was very reliable and cheap, but it didn’t turn well and was infamously tippy. Hopefully this new design will be just as reliable, but one heck-of-a-lot more stable

The little bits on the sides are for attaching the bumpers.

Looks nice! I would say that if you wanted a maneuverable robot, this is definitely the type of drive set up you want. One thing you didn’t specify though: how far are you lowering the center wheel? Team 1726 had an almost identical frame geometry with the center wheel dropped 1/8" and it handled beautifully; the turning was excellent and it didn’t have any noticeably rocking on carpet.

The only thing that really jumps out at me is the lack of cross bracing; you may want to have more reenforcement if you plan on going to a regional like Davis again…

Martin,
It looks good so far. I always caution teams that putting this much rubber on the floor causes current to skyrocket in turns. Essentially you are putting the motors into a near stall condition. Dropping the center tires helps considerably but very few teams make the height adjustable. I would think that you would want to have some adjustments to compensate for different conditions and wear on the treads. I am guessing that there will be some outboard structure to prevent damage to the wheels, at least it looks like that is what is provided. Looking forward to seeing it in action.

The only design change I would suggest would be with regard to the brackets that attach the sides to the front and back. You can easily make a long angled bracket on the bottom and keep the short bracket on the top. The bottom bracket won’t get in the way of your electronics if it is longer, and it could also help hold up your floor. Also, if you make this piece longer, there is less force at each connection point during frame torsion and it would not need to be welded into place… fasteners would work.

As for the middle wheel height, dropping that center wheel down 1/8" is about right. I’ve used 0.15" and that seems to work well also. Another way to monitor this is to keep new treads on the middle wheels. I’ve also seen teams that make their outer wheels have a bit less of a diameter, and that effectively does the same thing as dropping the middle wheel. The wheel speeds are slightly different, but that is negligible in this application.

Best of luck with this. It looks outstanding.

Also, congrats on having the guts to post this design… putting it out here for people to comment on takes courage.

ps… thank you for designing in AndyMark products.

I’m curious as to how you’ll drill through the 80/20 so that your axles not only go through it but can also move within it (assuming a pre-cut groove?). Will it be milled?

80/20 isn’t the easiest thing to mill or drill, so I am simply curious. I like the simplicity of the design and open-ness of the middle.

Yes, the center wheels are lowered 1/8".

As for cross bracing, we’re probably going to do something along the lines of what Andy Baker suggested and attach a single sheet of wood or aluminum to the bottom of the frame.

From the looks of it, Davis is going to interfere with school activities and we probably aren’t going to go

We might be going to PNW instead - which is exciting since its the first time in years we went to a competition outside of California!

I really like this sort of drive train. They can be made to be lightweight, sturdy and accept all types of gearboxes and transmissions.

It seems as though, as Jesse mentions, you’re tensioning your chain by sliding the wheels in a slot you will cut through the extrusion. I’m interested in learning more later about that works for you. We tensioned chain last season by sliding wheels in aluminum tubing – a similar idea – but had some trouble with the wheels toeing in or out if the two bearing plates became out of alignment. It looks like you’re using channel to bridge over the 1x2 extrusion, though, and won’t have that problem. Bumpers should protect the wheels from being pushed in their slots by other robots.

My concern was with how you’re apparently planning to mount the AM gearboxes, though I may be misinterpreting something from this picture. It seems like you’re planning to either replace or modify the outermost plate on the gearboxes to eliminate its mounting flanges and instead using the spacer hardware to go straight into a t-nut within the extrusion. Is that true?

If so, you might want to consider adding holes to the outermost plates above the existing holes and also tying them in to the upper slot on the extrusion. Those AM shifters with two motors are pretty substantial and I’d be uncomfortable supporting that weight on two t-nuts. It’s not unprecedented for t-nuts to tear themselves loose and you’ll have nearly 8 lbs. cantilevered on them.

What’s your source for replacement sprockets for the AM output? They’re furnished with sprockets that have a narrowed hub out of the box – are you just going to find 1/2" bore, keyed #25 chain sprockets somewhere and take down the hubs yourselves?

Last year’s drivetrain was very reliable and cheap, but it didn’t turn well and was infamously tippy. Hopefully this new design will be just as reliable, but one heck-of-a-lot more stable

Part of the tippy issue is the wheelbase and wheel size, another part of it is where you put the weight on the robot. Make the frame heavy! that’s where you want weight to be, and it will force you to make the rest of the robot (the stuff up high) lighter. Don’t be afraid to make the frame of a very substantial material and section design.

(also don’t be afraid to ignore this suggestion, most everyone else does!)

Are you changing the gears in the andymark shifters? I don’t think you can get 10 and 6 fps.

The wheels in the middle don’t have to be movable for chain tensioning. Only the outer four should be able to move. The center ones can be stationary.
340 did something similar to this last year.

Gee, we liked your inventor drawing so much that we decided to build it last night :yikes: !

Actually we built this last season. I guess we think alike. Very similar to your plans using modified andymarks and extrusions. Each wheel can be individually adjusted for tension.

Several things to watch out for. Like Andy said, 25 chain stretches. Be prepared to adjust frequtently. Make sure you use more than just 2 T-nuts. The wheels will move. Don’t worry too much about stiffness. By the time you add your arm, lift or whatever, it should be more than stiff enough. If you are using 6" wheels, please note that the bumpers must be installed above 2.5" which means that they won’t be fully supported by the brackets as shown in your drawings.

This was our best base/drivetrain to date. Would like to give credit though to team 254 and 60 for inspiring some of the design elements and attributes such as the overall layout of the wheels and frame.

I think we might also be trying for PNW this year so we will definitely check you guys out.

I am loving the wheels!