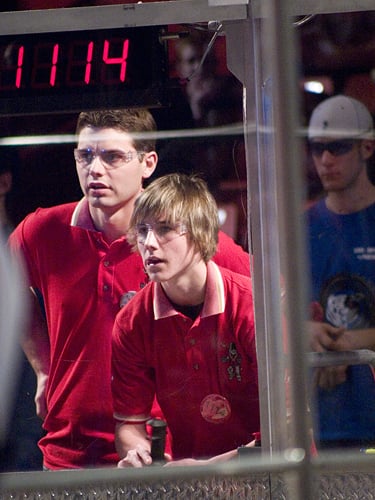 These guys were the bomb at Midwest, the driver even did the token Jordon tongue hang as a tribute to Chicago!
Kyle_Love December 31, 2018, 10:47pm #2

1114 has, quite possibly, the most dominating drive team ever assembled. Their drivers are outstanding, year to year, drive team to drive team, they sure know how to “breed drivers” up north.

very funny, way to go 1114. I liked the bot, it was an arm and a shooter. Awesome job guys

The blonde one the controls thinks I’m a creeper because I like super stalked him last year at Waterloo and most likely the year before that!!

I remember him from last year, talked a little bit at IRI. Don’t tell me he’s only got one joystick again…

1114 is the picture of professionalism, and that can be seen everywhere from their pit, to their scouting, and especially down in the box when they are taking home the gold. Whether it be the first, or in some cases third of the season these crazy canucks really know how to keep their composure. If I were ever to mentor a FIRST team after I get out of college and into the “real” world, I would use this North American power house as my model.

Can’t wait to see you guys in person at Waterloo.

This is the comment that came up when I just loaded the portal page:

I can’t think of any better way to describe 1114’s machine for this year.

1114 needs to send some robot lovin more northh my way

You guys are living idols!!

The blonde one the controls thinks I’m a creeper because I like super stalked him last year at Waterloo and most likely the year before that!!

Um, can we convince you to like maybe stand about 15 feet behind their driver station and scream “I love you Brandon!!! Marry me!!!” as loud as you can throughout their matches?

If she doesnt do it. I know plenty of girls who will. But seriously Lindsay, stalking is bad.

It sure doesn’t look like much of anything else can flap them.

lmao that would too funny! if only it were that easy to slow them down :o

that’d be naughty of me…

lol since I slipped about my little “obsession” with this dude… I’ll tell you guys straight out!!

When I see him on the big screen… you know when they like pan the drivers or zoom in on the drivers removing the robot I go NUTS!!!

I was talking to people on his team… trying to creep him.

Anyone else just think thats a tad weird?

could you image a couple where they are from different teams, and quite the distance apart… That may be a first for FIRST!!

I dont know. From what I’ve seen it seems like you are all about the simbotics guy. I smell a waterloo love story.

LOL Daniel… you’re sleeping on teh couch tonight for that comment! >_<

lol we will see what happens in Waterloo! Don’t bug him if he’s on our team! I don’t like yelling behind my back… even if it isn’t about me lol