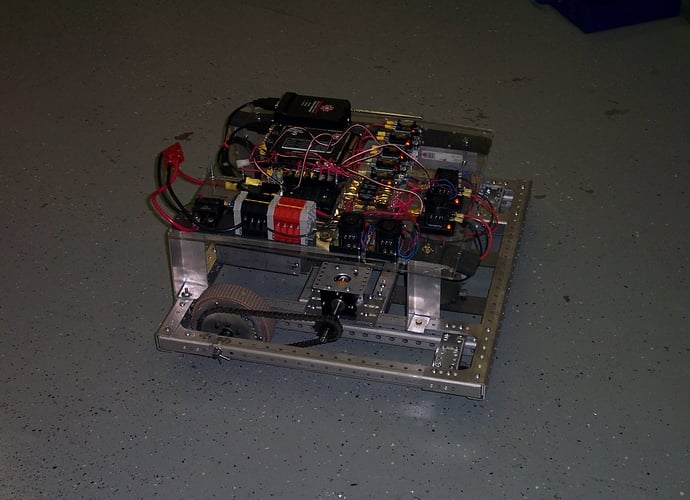 Here’s our unfinished bot; just the drive system and the electronics. We got it running around by the end of the 4th week.

This is enlightening. The electronics take up even more space than I thought. Hrrm. Seems like you have a lot of them. What are they being used for?

Is that two wheel drive? And is your robot gonna weight 50lbs when its done?
I really want to see what your gonna do with this one.

I’m always glad to catch a look at 1225’s robot. (My mom’s side of the family is from there; my cousin teaches math at East Henderson, and her husband is the football coach at Hendersonville High. 1293 also had a pretty awesome match with them at Palmetto last year.)

I’ve sort of been turned off by caster robots in the past, but they’ve been known to work wonders in the right hands. The one thing I might suggest is flipping the sprockets on the wheels around so they point inboard; doing so brings the sprocket on the BaneBots shaft closer in, which would cut down on side loads on that shaft. (The bearing block would also be a good idea, if you can fit it in, but the sprocket flip is free.)

You sure have a lot of relays on there!

You sure have a lot of relays on there!

I think it’s fair to assume that we should expect some crazy pneumaticness?

Most of the electronics are for the pneumatics. We’re going to try and build an articulated arm.

Hmm Billfred, I took gym from B.J. Laughter last year. I think I remember you from competition at Palmetto last year. Nice to see you again. Team 1225 wishes you luck with your team.

Thanks for the suggestion, it sounds like a good idea. We’ll run it through the mechanical team.