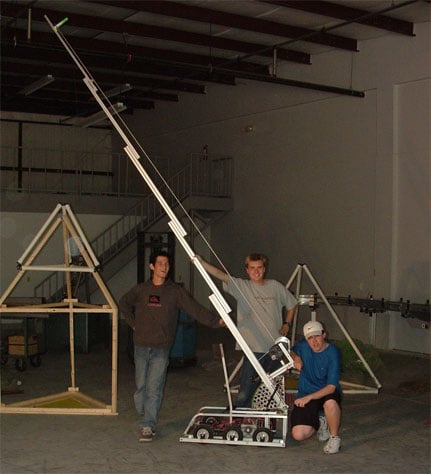 The Knights Who Say Nee’s 2005 Triple Play Robot. Arm extends to a little over 13 feet.

That makes sense, it is like a small forklift on a joint! I’m just cirious as to how you raise it up, all I see is one cable going to the base.

Methinks that can cap very, very, very high. It might have the cable on the back loop back down the arm and through all of the joints.

perhaps a pulley at each end of the extending arm sections. . . that would do it, 1 cable for the up/down movement. . . my thought

that doesnt look stable at all. Pfff

that doesnt look stable at all. Pfff

I agree. What happens if someone hits you from the back. If you guys have some sort of outriggers then that is a very good and simple design.

Well, it wouldn’t be stable if we had it that far up while driving. It’s very stable when it’s retracted though.

As for how we lift it, here’s an image that might help describe it a little better:

We have a FP motor attached to a spool (link [the FP motor had a shield added after that picture]), which lead the whole aluminum arm up and down with two cords, one that would retract, and a second one that was looped around all of the steps on the arm (114ManualLabor was right). The cord was nylon (I think) with a 4-5mm diameter. The assembly was attached with gas shocks to the robot base and moved along a plastic tooth track by a Nippon-Denso motor. The drive train was a 6 wheel tank-drive (using inflatable 6-inch wheels at ~30psi), controlled by 4 CIM motors and the 2 standard FIRST-supplied gear boxes. On the bottom of the back and front we had two 1-inch hard rubber brakes that would stop us from tipping over.

where’d you get the plastic tooth track from?

You could probably just machine the plastic tooth track, it wouldn’t be too hard with a milling machine. And yeah thats kinda the same idea with my teams arm, except we only used 2 extrusion segments this year, last year we used 3 but had a lot of problems.