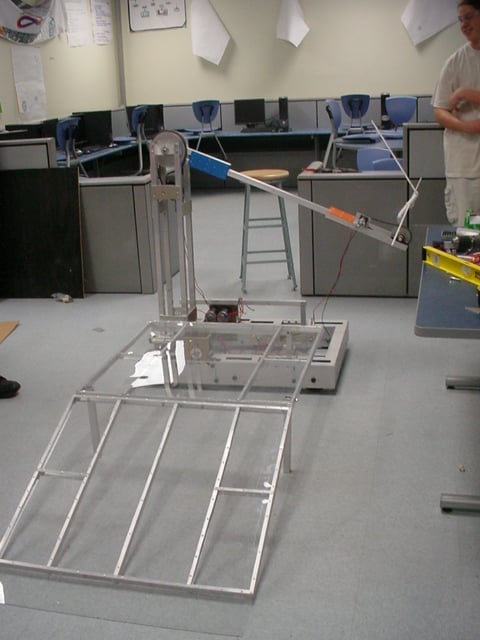 I must say. Thats a pretty nice looking robot:cool:

Hey Arafin. I think I’m almost done with our robot’s cam. If the code goes well I’ll be happy to help your team

Robot looks great, but are you building that in a computer lab?

That seems like an inopportune place to build, with all the computers in danger.

Robot looks great, but are you building that in a computer lab?

That seems like an inopportune place to build, with all the computers in danger.

We spent the first 2 weeks of build season in a computer lab. As long as you’re carful, everything is a-ok.

Arefin, after seeing yours and 1889’s robot pictures…I’m scared for the Florida Regional.

I spy with my little eye…
http://marsbot.org/upload/files/gettinontop1345.JPG
Nice job 1345 guys, good to see your 06 bot is still in one piece too.

Now that it’s only 4 feet, how well can it score the top spider (if at all)? If it can, what method are you going to use to place them on the top spider?

Wow, this looks like a twin of our bot this year and we will be in Florida this year too.

How thick is the polycarb on the ramps?

Arefin, after seeing yours and 1889’s robot pictures…I’m scared for the Florida Regional.

You haven’t seen nothin’ yet…

Sean, to answer your question, yes it can score on the top one… but it takes time to line up and then try to score, so I will say, no we won’t be scoring on the top spider. Today it came down to either going down to 4’ and putting the ramps on or stay at 5’ and be able to score on all 3 levels of spiders and have one ramp. Students thought it would be better to have two ramps and give up the top spider, so we went with it.

Jimmy, you are right. Florida regional will be packed with robust bots. Can’t wait to compete against/with you.

Hey Arefin (and all the platinum Dragons),

I like the ramp system, seems like a good idea for a ramp system. I have a couple questions though.

Just some food for thought.

Hey Arefin (and all the platinum Dragons),

I like the ramp system, seems like a good idea for a ramp system. I have a couple questions though.

Just some food for thought.

Rich, thanks for your comment. Here are the answers…

Do you think you’re going to have room for guard rails, just in case the robot wasn’t lined up straight as it was going up?

We will be climbing that ramp thats for sure.

Keep up the good work.

As for the Florida Regional:ahh: , yes it

Looks good!!! I have some questions since you have tested yours already.

How grippy is the lexan cover? is it slippery or does it give them more traction?

My only question is that that looks like quite a bit deflection in your cross members of your ramp.

Have you done any calculations or measurements to see how close you are to the edge of where yielding will occur? I would hate to see it begin to form itself into an unusable shape ( then again you can always replace it if or when that happens )

Also, did you drive the bot up the ramp or place it there? I’m kind of curious to how well that polycarb ( or acrylic? ) holds up when a robot kind of slams into it.

It looks solid tho maybe its just the angle of the picture that looks like its causing that deflection. Maybe run some calc or even easier just some bench tests to see how when the dynamic loading / impact force of the robot running into and driving up the ramp will effect the integrity of those cross members.

I’m sure you’ve already been beeting the heck of it hehe but just a reminder.

Looks great, I’m deffinately gonna be scared to play you guys at UCF!

You guys plan to only have one ramp?

My mentor is trying to convince us, if we’re overweight, to remove one drive motor on each side (right now we have two per side). I say we remove one of the ramps… We’ll be better defensive, and we have a good manipulator. The ramp(s) will just help us get to the finals… then scoring should allow us to win. At least that’s how I view it =/.

Team 1029, yes, there will be some kind of guard rail once we get the whole ramp working.

Josh, it’s lexan. I wouldn’t say its very grippy, but our last year’s robot had no problem climbing up that ramp. If traction becomes a problem, we will put some stair tread on it.

Dan, yes, there is a bit of deflection in the back, if it collapse anywhere, it would collapse in the back. The plan is to have U shaped legs for supports instead of just one 1x1. Ran some calculations and it will hold atleast 180 pounds. I don’t think anybody’s bot will be more than 150. We drove the robot up the ramp, not place the robot on it. We ran into the ramp full speed (which was probably about 7/8 fps) and with 2" of clearance (last year’s robot), the robot didn’t have any problem getting up the ramp. Dan, you already know how much I beat the crap out of the robot during build, so it doesn’t break during regionals.

David, you guys are welcome to climb up our ramp. =)

Brad, we will have two ramps. One on each side. Students just build one of them yesterday, so we could test it out. We should have the other one done very soon. Stay tuned.