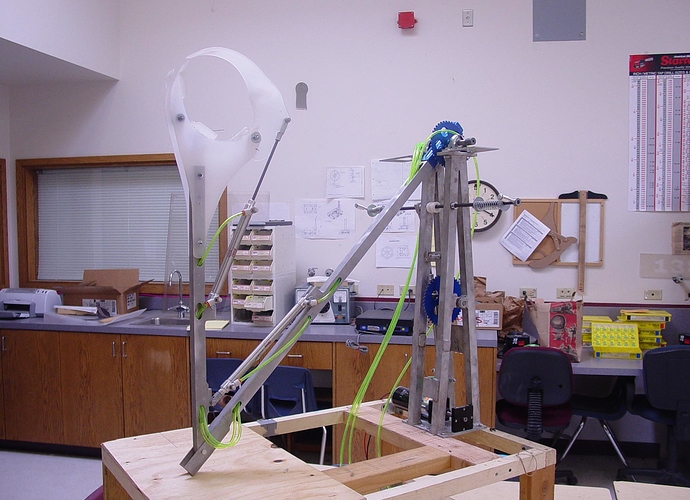 This is our arm as of 2-6-07. It’s completely done except for the chain, the camera and the potentiometer. It’s mounted onto our wooden prototype frame so that the programmers can begin working while the rest of us finish the base. It will be able to score on all three heights of goals efficiently. Good luck. We’ll see you at LA and San Diego Regionals.
T3_1565 December 31, 2018, 8:22pm #2

may I ask why you went with pnematics on the elbow joint?? Other that that it looks really nice! make sure you don’t pop the tubes with that claw lol

Am I correct in saying that the donuts are going to fit in the little hole in the claw? Are you guys going to just come under a ringer and pick it up by balancing it in the hole?

i predict about 3 upper arm movements per game with that configuration… it looks soooo nice though.

may I ask why you went with pnematics on the elbow joint??

Weight and ease of use is my guess. It would appear that they intend to drop it flat on the floor for pickup and then raise it straight up to score, with no in-between positions necessary. Makes the operator’s job easier

I love the blue sprockets.

How much does it weigh? Also, could you explain that rod sticking out from the base with the springs on it? Is it a stopper of some kind? I can’t really see if it’s connected to something…

We chose to use pneumatics on the elbow because we thought it would be easier to do than to mess with motors or chains that far out. We also thought that it would be much more simple for the operators. The original design was for the elbow to deploy in autonomous and remain out the remainder of the match, but as we built it and thought that it might interfere with defense we started to sweat a little. Once we finished it, we found that it would recall with a little nudge. We still aren’t planning on using that joint too many times.

The rod sticking out of the side is our mechanism for releasing a ramp and platform. It’s hooked up to a lever on the shaft wich will turn it, causing more levers to turn, causing the pressure of the springs to push them out.

The whole system, including the base weighs about 20 pounds, I think. We made the base a little beefy, but we wanted the support.

The claw is made of some kind of poly-something-or-other. There are people on the team that know the name but I don’t. But we all took turns standing and jumping on it and it didn’t break or even warp! The claw weighs only about a pound and a half.

I love the blue sprockets.

By the way the claw is made of polypropylene (corecting our lazy leader who is too lazy to go find one of the like 15 people on the team who could’ve anwsered the question).

Oh, and also with chains and everything in working condition on the A-frame and arm ways like 27lbs.

By the way the claw is made of polypropylene (corecting our lazy leader who is too lazy to go find one of the like 15 people on the team who could’ve anwsered the question).

Oh, and also with chains and everything in working condition on the A-frame and arm ways like 27lbs.

dang it you beat me to it:D