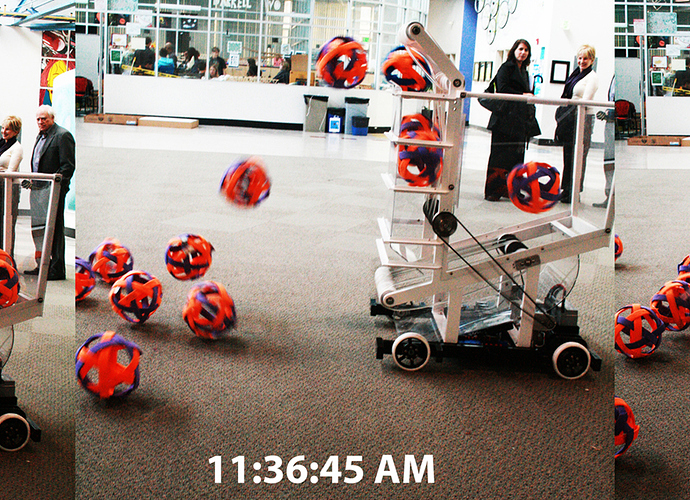 This is a time lapse of our 2009 Robot. These were taken this morning during our final practice with our competition robot.
Navid_Shafa February 17, 2009, 5:06pm #2

Your cow is regurgitating all over the carpet!

Does she have 4 stomachs for ball storage?

Looks like a competitive bot once again. Great job.

Looks great! Where are you guys competing this year?

looks like one of your lower belts fell off the roller there jon, lol

looks like one of your lower belts fell off the roller there jon, lol

It’s not, it’s an illusion. We haven’t had a single belt fall off since Sunday afternoon. We took the bot back Sunday evening and made some modifications to keep the belts on the rollers.

As for where we are competing:
San Diego
Las Vegas
Atlanta

ahh, i didn’t get a chance to see it yesterday so…

wow we are all going to the same events this year, lol

someone always beats me to it

What’s your robot’s weight? And what material did you use for your hopper/conveyor?

1538 is a class act and one of my favorite teams. Great looking robot and good luck to you guys, rooting you guys on!

Our hopper is built in three panels, each made of .0625" lexan. The pickup scoop, dumper backings are made of .125" lexan. We formed all of our plastic with a series of fixtures and two heat guns. It’s quite easy. We spent a total of 2-3 hours cutting and forming all the plastic for one and a half robots.

Our belts are made of 5/16" urethane. We found a cheap source of cord stock and a belt welder that is half the cost of the one McMaster sells. Without these two finds we would not have used urethane. The rollers are made from UHMW tubing with aluminum end caps.

While this design looks simple, there was a lot of testing done. We originally were running 10 belts for pickup and 19 for dumping, but when we first ran the two systems we were pulling over 100 amps! After optimizing the efficiencies in both systems they now pull about 28 amps per motor. We did this by tuning the chain tension, increasing the reduction, cutting down the number of belts, testing different groove depths and widths and remaking some of the belts to be a bit loser. All in all we spent about a week optimizing our pickup and dumping systems.

Our goal with this design from almost day one was:

So far our robot has accomplished all of these to some degree. At our pre-ship scrimmage held over the weekend we were pleasantly surprised by how many points we can score with even the smallest windows of opportunity.