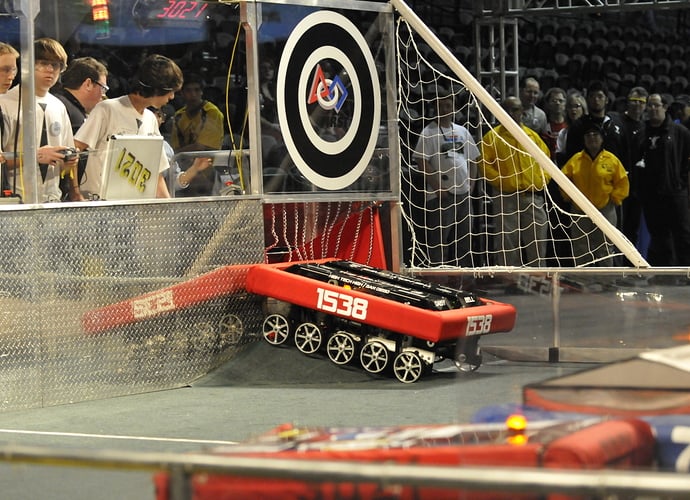 -107.2lbs, 17" tall
-10 Wheel Drive, only 4 wheels touch the ground when on the floor.
-13 ft/sec
-Can traverse the bumps and go under the tunnel (for now)
-Usable ball magnet, still being improved upon
-Kicker, capable of kicking balls from the far zone
-Recessed back, to help herd balls when in the near zone

Congratulations 1538 on your gorgeous 2010 robot. Sure looks fun to drive, but not fun to face. Good luck this year!

How can it go under the tunnel?
You mentioned that the robot is 17inches and the tunnel is 16.5inches according to the game drawings…

is it 4 wheels at one time total or 4 wheels per side?

It appears to drive like a 6WD base on flat ground.

no it cant because he called it saying it drives with 4 wheels, but im not sure if he means 4 out of all 10 or 4 out of 5 per side

It DOES drive like a 6WD base, with 4 wheels touching the ground at any one point.

no it cant because he called it saying it drives with 4 wheels, but im not sure if he means 4 out of all 10 or 4 out of 5 per side

6WDs use 4 wheels at a time (with the exception of 25, but I’m pretty sure 25 just defies the laws of physics with their robots every year).

To clear things up:

It is a 10WD - all 10 wheels are driven, with the center wheels being directly driven from the transmissions (like a standard West Coast Drive). It does drive like a 6WD, with only 4 wheels (2 per side) touching the ground at anytime while we’re flat. Here’s how that’s possible:

Wheels 1 and 5 are on centerline with the siderail of the chassis.
Wheels 2 and 4 are raised 1/8" above centerline.
Wheel 3 is dropped 1/8" below centerline.

With the wheels set up like this, so long as we’re on flat ground, only 2 wheels per side can touch the ground at anyone time. However, when going over the bump, the extra two wheels allow us to never worry about bottoming out on the bump.

why didnt u guyz making a lifting mechanism, i was expecting you guys to just completely dominate sandiego like last year.

How would hanging have made us dominate? I think had we hastily put on a hanging mechanism our performance would have been worse because our ball control and kicking systems would not be where they’re at now.

How many teams in San Diego were even capable of clearing the far and mid zones in autonomous? One? Two? How many teams could quickly and efficiently move balls from the mid-field to the near zone? That would not have been possible had we not had a reliable ball control and kicking system.

Remember, ‘the robot is never done’, we know there is a lot of room for improvement and we plan on making this robot better. I will guarantee one thing, this robot will look different when it takes the field for its first qualification match in Atlanta.

A hanging mechanism doesn’t make a team dominant. Many teams who have hanging mechanisms, but better ball scoring methods, have decided to drop the hanging aspect completely. This game isn’t about who can hang, it’s about ball control, defense, and avoiding penalties. You can use a hanging mechanism to make your way though qualification matches, but hanging isn’t as important as people might have believed. If you can score 2-3 balls in half the time that it takes a team to hang…then who needs to hang

I’m excited to see what you guys ship to Atlanta.