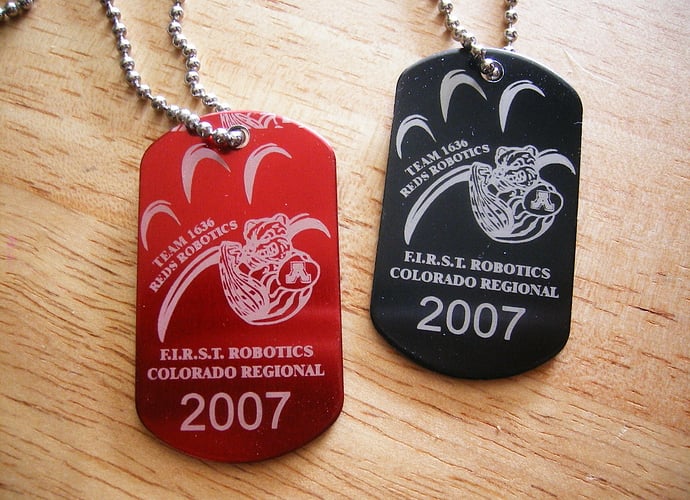 These are two of the dogtags we’re giving away at the Colorado Regional. The red one has a mistake on the top because it was a test tag.(I forgot to change the dimensions before sending the file to our laser).
robostangs548 March 15, 2007, 7:34pm #2

Hey how much would it cost to get my hands on some of those for my team??? PM me back if you can do it…

Hm…looks like a new-age one of our dog tags

I still like the military style, but im biased

wow…those are…SWEET!! is there a chance that you can send me one??

Those are awesome. I love the way it looks.

I’m jealous. I want one of those now.

Last year the tech department was able to buy an epilog laser. It came in the same time we shipped our robot. We were disdussing buttons and I suggested keychains with the laser instead and it led to dogtags. This year I designed and spent(and still spending) the countless hours in the laser room making them.

. Reason they’re going to be really really limited, we only have so many blanks left. The only people we’re going to reserve dogtags for will be 1583’s drive crew and 555’s drive crew.