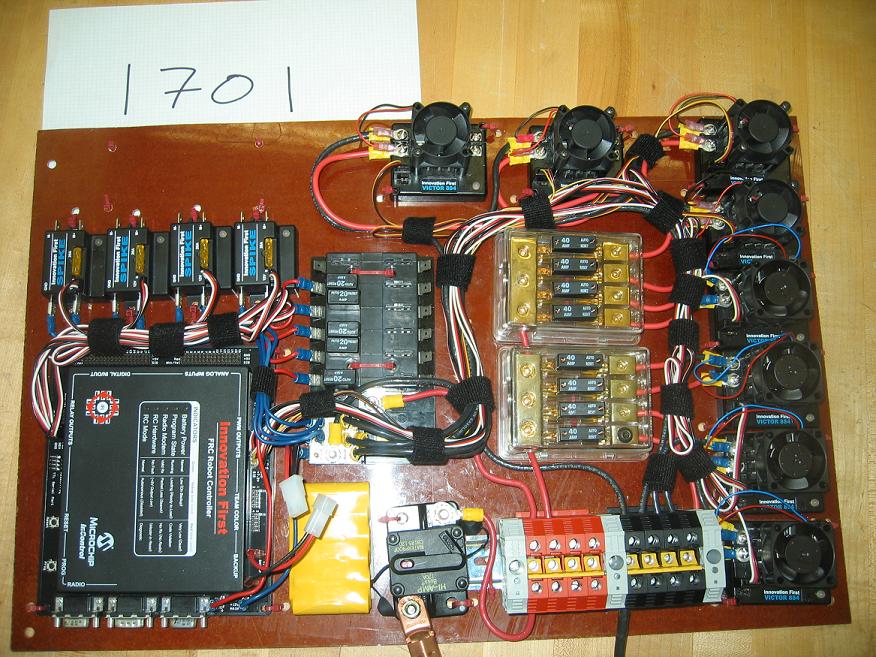 Some nice wiring for that may motors/spikes. . . . Not sure if I want to see the Operator Control board or Software to control them all. Nice Job

Nice bundling. I’m still not used to the new yellow backup battery, though.

Nice job! Very clean. One thing though, you need to hook up both maxi circuit breaker panels to the power distribution block separately.

Other than that it looks great.

I’m not sure of your application for 8 Victors, but you can hook the Victors up to the black fuse panel. I would recommend this for weight and simplicity reasons, but I’m not sure of the motors you will be attaching. I agree with Matthew, you must hook the other fuse panel to the power distribution block, it is clearly stated in the rules.

:ahh: Please, please replace that poor 12 gauge wire going from the 120A breaker to the power distribution block with a 6 gauge wire appropriate for the load. Otherwise its bound to go up in smoke once you get a few of those vics pulling amps - and that wouldn’t be pretty!

And run a separate lead for the second maxi, as previously noted.

Other than that, it looks good - nice and compact and fairly tidy wire bundles

EDIT: Actually, I think based on <R57> you may need 6 gauge wire from the power distribution block to each of your breakers as well. I’m not an electronics guy though, so someone should check me on that. I couldn’t find anything stating that you MUST have 6 AWG there, but the 7th bullet of that rule suggests such.

Looks… Simple, which is good for swift accurate repairs and managing:cool:

Yes, as has been stated previously: #6 awg, please!
That 12 gauge will go up in smoke if you actually run all the victors in that configuration.

You may also want to plan on switching some of the leads to the Victors over to the other breaker panel. Many of the motors you may use only draw 20 or 30 amps, and those breakers won’t fit in the 40 amp maxi blocks you have now.

This is incorrect. The Fisher Price motor pulls enough current that they could warrant the use of a 40A breaker, however they will be prone to letting out their magic smoke if run near that. 4 CIMs + 2 FPCIMS + 2 FP = 8.

Thanks for the suggestions, we have fixed the guages from the distribution block and from the main breaker.