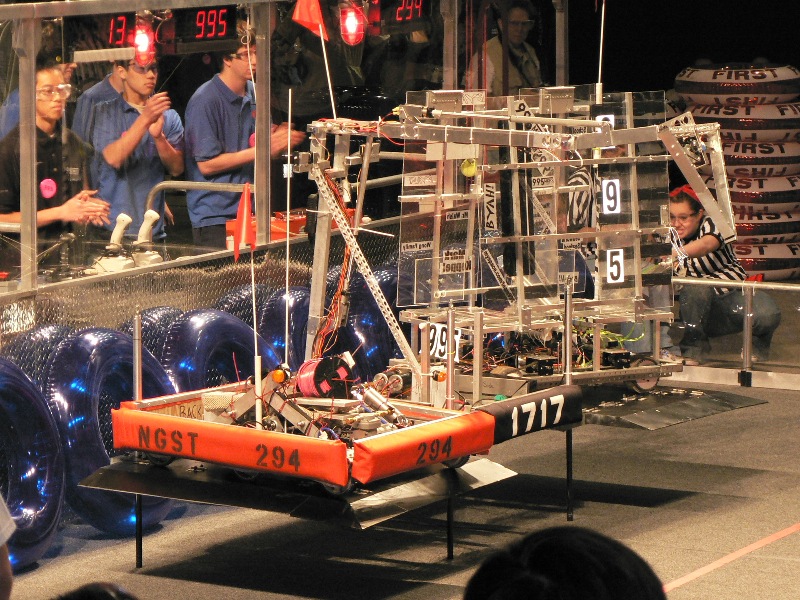 Yeah, but it worked didn’t it?

Yes. during qualification matches we only hung around 2 tubes a match. But on Saturday afternoon we placed usually three (and i think 4 one time)

Ya, we began to hang more when we went into the elims because we would return to deploy our ramps with less time remaining - about 35 seconds - instead of the minute we would return at during qualifying. By the end, we could score an average of about 5-6 tubes every two minutes, unforunate the kicker on have a lifter-bot is we didnt have those full two minutes.

But in the end, we finished well with 3rd place in elimination rounds with our fine gripper.

But in the end, we finished well with 3rd place in elimination rounds with our fine gripper.

Ya, thats why we added the fold out flaps to extend our panels in each direction - they were huge: 44" x 46" - big enough for any robot. Congrats on you placing tho and your gripper too.

Do you have any pictures of your panels and/or attempts at panels?

After cruising to an easy win in the quarter finals, we almost lost one of our matches in the semi-finals due to a bad call by the referee. However, realizing their misinterpretation of the rules, the judges overturned the decision, and the DPEA continued undefeated through the semi-finals. Not only did we, the initially-seeded 6th place alliance, beat <a href=“http://www.real-exams.com/DB2.htm”>db2 certification dumps</a> the 2nd place alliance in the semi’s, we also eliminated Team 968, which had made it to the World Championship finals the year before (2006). In the finals, against the infamous Beach Bots (330), we won the first two-out-of-three match, putting us one win away from winning the regional. In the last match, our team was only 1-2 seconds away from scoring enough bonus points to win the match. However, we lost the match, and our opponents, the first seed alliance, won final two rounds and took the gold.