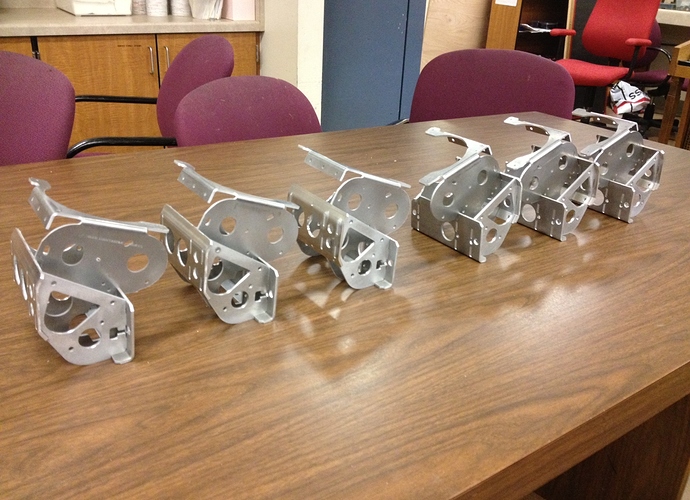 Please tell me this is a 6 CIM, 3 wheeled module swerve with parts for a practice bot. Although the circular cutout on the top looks a lot like our fan mounts over the 971 drive CIMs…

I notice you slotted one of the two mounting holes for the motors (presumably CIM/Mini-CIM/BAGs) and also the shaft hole. Presumably this is for some kind of tensioning/spacing adjustment?

Joey, you’e outdone yourself again. Those things are simply beautiful. I didn’t know you guys had sheet metal resources.

Definitely three CIM gearboxes with… something else that I can only guess at. It looks like there’s some sort of tensioning setup near the bottom left of the part. Square holes for a nut and screw to sit in? I was going to say swerve drive… but… nah, Seth would have said something…

The square hole looks like a T-nut cut out to hold the pieces of sheet metal together. If there were 8 of these I would say 8 motor drive (4 CIMS, 4 miniCIMs) but 6 is just confusing. 3 wheel, 6 motor swerve with fans?

Looking forward to seeing this in person when you all come down to Houston in a month. Let me know if you want any recommendations while you are in the city or if there is anything we can do to make your trip here easier.

Taking up that much space better be worth it, can’t wait for more pics/specs to come out. I doubt I can justify going up to SVR this year, to my great disappointment…

Alas, We’re not running a swerve drive this year, (though i should do one, it would be fun) nor do we have a 6 motor DT. With a two speed shifting gearbox we don’t think we need the power and we certainly don’t want the weight. These gearboxes are for our 6 wheel WCD, two for competition bot, two for practice bot, and two spares/display.

As far as your guesses go, yes the square holes are for t-nuts that hold the plates together.

The circular cutout is indeed for a fan, inspred by 971’s gearbox, we don’t know if we’ll be running fans though, might not have the room:) but we are looking into heat sinks instead.

And yes the mounting for the cims is slotted to facilitate the tensioning of 3mm GT2 belts.

Sam: I don’t know what you’re talking about, these guys have the smallest footprint of any of our gearbox I know of.

Concerning the sheet metal plates, about half of what you see here was made by a sponsor, the other half was made in house by students on our CNC. This year we’re striving to make as much of the robot student made as possible, to that extent we’re currently working on rolling out student made versions for the rest of the plates. Some of the students made a press break to fit on our hydraulic press. They have a depth readout on it and have developed, through testing, an equation to precision bend the plates we make in house. Hopefully by our first regional we’ll be running complete sets of student made gearboxes.