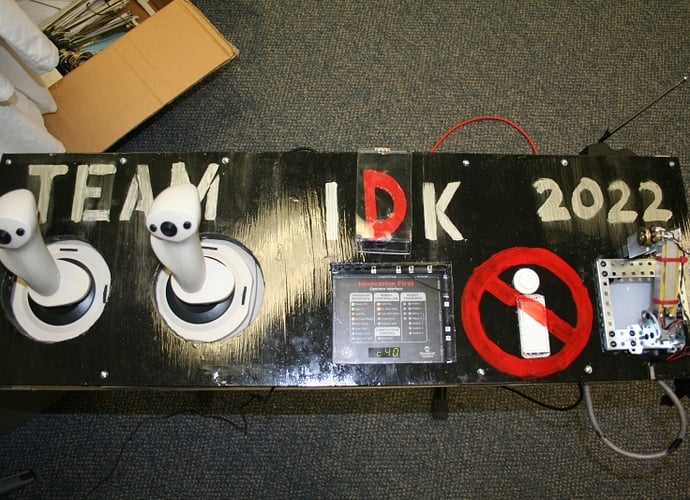 Kat and I made this operator interface, and we’re hoping for an award. The two joysticks control the base, the D is a deploy button for the ramps, the I is made of a button and a switch for an automated subroutine and turning suction on/off, and the maquette (mini arm) controls our arm. What do you think?
FunkyRatDemon December 31, 2018, 8:31pm #2

Neat’o! I didn’t know you can win an award for this!
We at 753 have 2 joysticks controlling the tracks, 1 lift joystick, and a few automated buttons for the lift mechanism

dude, i totally had the same idea for controlling an arm! use a mock model, and attach pot’s onto it to give an analogue readout that you can send to the OI to control ur real arm. only thing is, i was worried about having a situation where the arm gets forced into position, and the mock would then be out of position relative to the real arm. however that could be alleviated to a great extent with a servomotor controlling the real arm.

I hope that things in the crate !!

Cool beans! Another person from my team and I had this Idea as well, but I’m pretty sure team 67, HOT, has already done this in the past…

And then there is this:

we did something like that back in 05’. Aside form the robot being completely autonomous it is the best way to control a robot in my opinion.

25 had an arm control like that in 2004.
We had something similar in 2001, but instead of an entire arm model, we just printed a picture and placed pots at each joint.

dood, that is the pimpest dashboard ever. [if i do say so myself…

] but i really like the one with the lights. Do u still have your baggie of LEDs?? lol