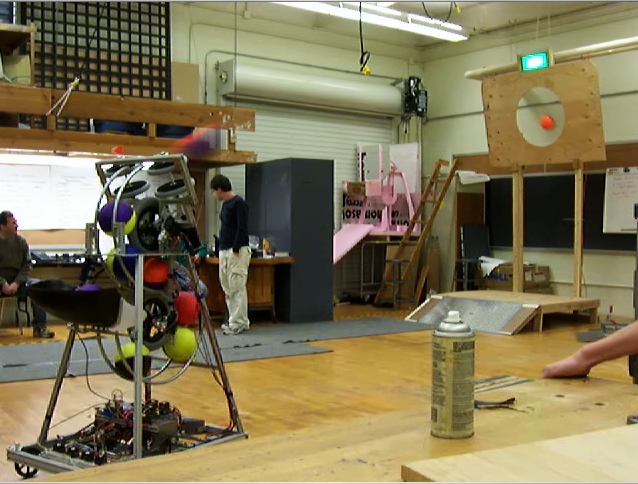 This is a still shot from our Autonomous Mode. I have put the link to the movie of the robot below. Here are some quick stats. This is our autonomous mode, it uses the camera and finds the light, then shoots all 10 balls in under 8 seconds. In this clip we make 9/10, not bad eh?
http://media.putfile.com/Team-293-Autonomous-Mode

Not bad at all!

At least your vision target is still nicely together, unlike ours.

that is very good. and you have very cool ball collector. good job!

Nice bot! Have you checked the speed of the balls as they exit because they sure look fast from here!

Nice shooting!!! How will you be collecting balls during the rest of the game???

That is a good autonomous mode. How long did it take (testing wise) to get it working?

that looks amazing!!! great job! do you have a video???

Nice shooting!!! How will you be collecting balls during the rest of the game???

If you notice on the back there is a large black net on the back which the Human Player can throw balls into.

As for the Autonomous mode, I do not know how long it took them to do it. I am at college so I get sent everything, I will have to ask my contact.

Here is a link for the video http://media.putfile.com/Team-293-Autonomous-Mode