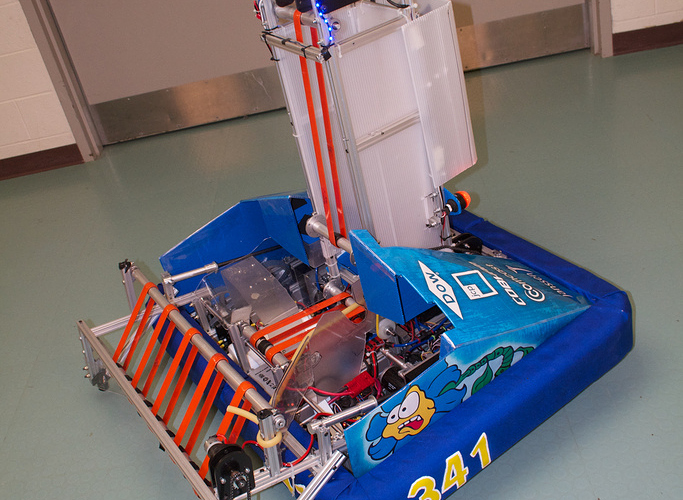 Our 13th robot, and 11th to bear the name Miss Daisy. After a long and interesting build season, we are VERY happy with how she turned out.

Looks like another awesome miss daisy machine. That intake system is really cool and I look forward to seeing it in action. From the videos I have seen of competition and the practice we have done, it is becoming clear how difficult picking up the balls is going to be and your intake system looks like it has more than solved that issue.

This is definitely a Daisy machine. I’m sure that come Championships, Jared and the team should be seasoned in and ready to what they wanted to achieve last year to really happen. Really impressive and can’t wait to see it in action soon. Good luck and see you at Champs!

Wow, that COG is impressive, This looks like an awesome robot, cant wait to see it in action.

Great-looking bot! Can’t wait to see it in action at the MAR disctrict events. See you all at Chestnut Hill!

Great robot Team 341! I really love the intake system on the robot, very unique and cool. See you at Chestnut Hill! 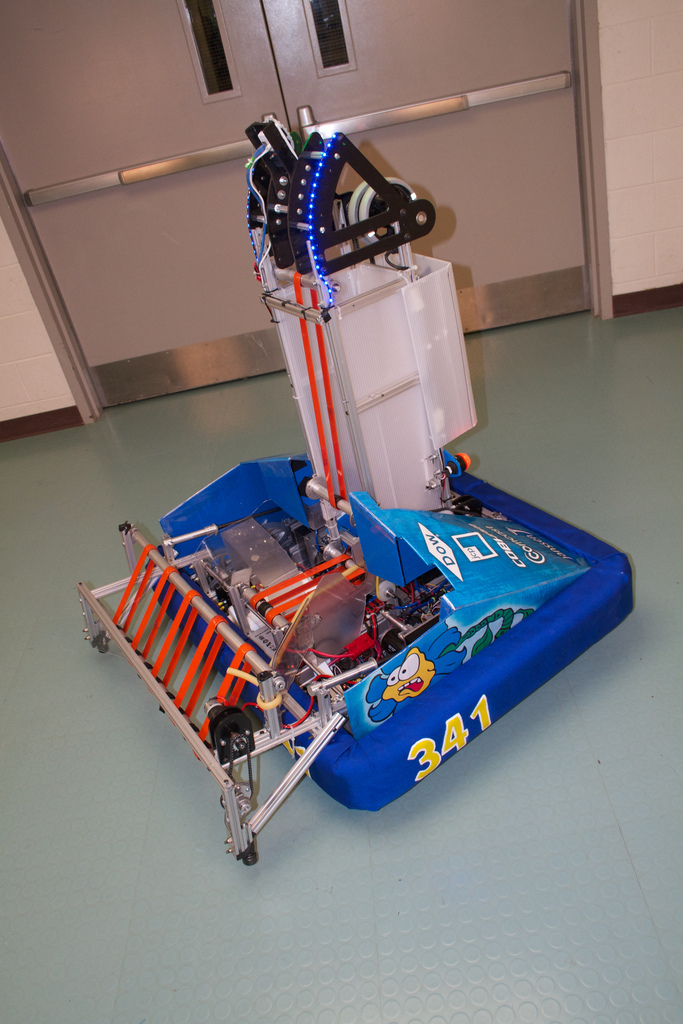 Our 13th robot, and 11th to bear the name Miss Daisy. After a long and interesting build season, we are VERY happy with how she turned out.

This frame rate is very impressive.

This frame rate is very impressive.

The code has been very carefully optimized to reduce the allocation/deallocation of dynamic memory between subsequent calls, which is what lets us operate at breakneck speed. This also involved a lot of debugging to hunt down latent memory leaks existing somewhere in the layering of OpenCV/JavaCV/WPIJavaCV APIs.

How did you solve the potential networking issues and latency? Do you have some interpolation for delayed frames? Do you have timestamps on the frames to know how long they took to trasmit… when you computed your position, and transmit this back to the robot does it take into account the latency on this end. How did you work around or simulate the FMS locked stress, and did you test against a typical network traffic of a match.

All of these questions scared me away from this kind of solution. I hope you have some good answers for them.

I guess you can always set still for a few seconds and that should solve that.

The short answer is that if we discover network latency/dropout to be a significant problem, we will move our image processing application to an onboard laptop. Failing that, our next fallback is to reduce resolution and/or framerate. To be frank, we auto target just fine at 5 fps (because the gyro loop is closed at 200Hz); we do 30 because we can

However, I do not expect this to be a major concern. In past seasons, teams have streamed live camera data directly to their dashboards with few problems. The only difference is now we are cutting out the cRIO altogether. While we haven’t run simulations against an “FRC network simulator” (but if you know of a tool that could be used for this purpose I would be interested in trying it), in theory there is PLENTY of bandwidth to go around. With reasonable compression settings these images are only on the order of 10-20 kilobytes a piece.

We don’t timestamp the images, but we do transmit our heading synchronously with new camera images being available. That way, the results returned by the vision application do not go “out of date” if they are received late. Out of order packets would be a bigger problem (it’s UDP under the hood). But absolute worst case - like you said - this would be a transient problem and would straighten itself out within a second or two.

EDIT: Forgot to add, we also do low pass filtering of both outputs from the vision system to help smoothness (and to reject momentary disturbances like when we occlude the vision target with a flying basketball :)). This should help with occasional frame drops as well.

It’s nice to see another robot with a wide pickup!

See you at Chestnut Hill!

Nice job there Jared and Al!

Awesome. Can’t wait to play with 341 at Hatboro-Horsham. I’d volunteer to use your opposite-loader, but I’m thinking we want to shoot our balls in auto.

What part number did you use for the optical photosensor / tachometer ?

It is the Allen Bradley 42EF-D1MNAK-A2 from last years’ Kit of Parts.

Fixed shooter on opposite side of intake (I wonder why?)

Thank you Jared and Team 341, do you have an upclose picture of your shooter and encoder setup ?

Here is a closeup of the shooter.

The sensor is on the left side of the picture, and two retroreflectors are mounted 180 degrees apart on one of the shooter wheels.