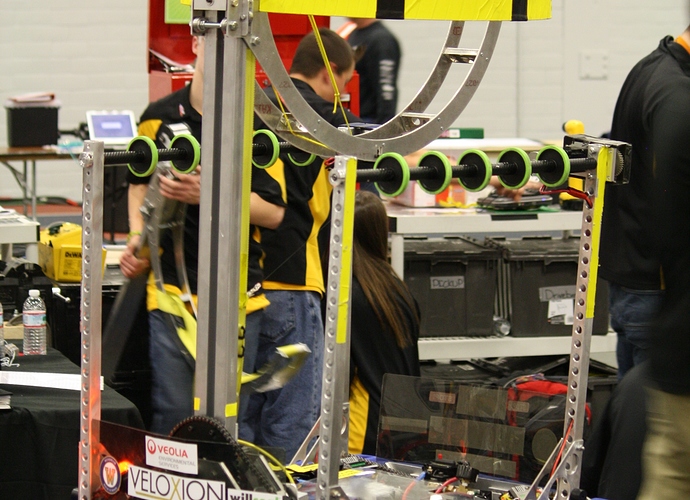 This year’s robot is our finest robot to date after tuning our build process and learning how to better utilize our resources.

While our team was late to the reveal party here is our reveal/UNH recap video. Most of the in shop footage is of our less glamorous practice robot.

Our team has already competed at the 2014 UNH district competition where we finished 4th, captained the 3rd seeded alliance, and were Champions with teams 58 The Riot Crew & 4555 Sprocketology after 10 long elimination matches. We were also awarded the Chairmans award at UNH.

We compete next at the Northeastern District event next week and the New England Championship two weeks later!

I absolutely love this robot. I just love the fact that it’s so different from everything else, and your shooting mechanism is so different, yet so simple. It actually took me a while to figure out how you guys were shooting the ball at first (it looked like magic lol) but it’s an overall great robot.

I love this robot, just because it is so different and uses a design that I would never imagine could work. I can’t wait to see it in person in a couple weeks.

I love your team. I love your robot. As Andy Grady said on Facebook… I think you could become the “closest thing to a New England powerhouse we’ve had in years.”

I really enjoyed watching your matches on webcast. That shooting design is one of the most inovative I have seen all year. Best of luck the rest of the season.

That is one amazing robot! I love the control of the shooter’s power and accuracy, especially for autonomous. You’ve definitely proved your robot’s effectiveness!

It looks like you’ve incorporated every aspect of scoring as part of your robot.
I just have one question. Are you able to unload the ball from your robot without having to fire it? It looks like it could but I didn’t see it in the video.

Team 237 is looking forward to competing at the Northeastern District Competition with you and everyone else.

That is one amazing robot! I love the control of the shooter’s power and accuracy, especially for autonomous. You’ve definitely proved your robot’s effectiveness!

It looks like you’ve incorporated every aspect of scoring as part of your robot.
I just have one question. Are you able to unload the ball from your robot without having to fire it? It looks like it could but I didn’t see it in the video.

Team 237 is looking forward to competing at the Northeastern District Competition with you and everyone else.

Hi Steve thanks for the compliments.

We have several ways of ejecting a ball and you are correct it isn’t shown in the video. One method is to just do a reverse pickup however the fastest way would be to “safety shot” it out. We have a few different speeds for shooting: full power, soft shot, and safety shot. Full power shot means we disengage the dog gear and release the brake when we want to shoot. This is our primary shot for shooting over the truss and long range shooting. Soft shot is to release the shooter while the gearbox is still engaged and drive the motor which is what we do in autonomous, closer range high goal scoring, and a slow power for low goal scoring. Safety shot is how we control the shooter in a safe mode by releasing the brake while the motor is still engaged which gives us a nice controlled release.

For quick assists and low goal scoring we tend to intake the ball up on to our bumper and just reverse the rollers which is similar to what 254 does in autonomous to gain control of the other two balls.

Thank you for the compliments!

Our release mechanism/ winch has two methods of locking; a bicycle disk brake and a dog shifter. The dog shifter goes to a gear powered by a planetary gearbox, and the disk brake locks onto a disk attached to the cable spool on the winch and is actuated by a pneumatic piston. There is a picture of the winch at roughly 0:24 in our reveal video (we made an improved spool after that picture, but the concept is the same), as well as the brake mechanism at 0:34. There is a video of a slow eject shot at 1:17. The entire winch assembly fits under the support structure for the shooter, so it isn’t very easy to see while it’s on the robot.

Thank you very much for the detailed replies from both of you! That’s a truly innovative way to control the power of your release!

I would only have one other question that may just be a small detail to general game play.

Does the tall structure limit the directions the ball can be delivered from? It looks like you have only received the ball with the structure as a “backboard”.
(I have watched some of your match videos and I was extremely impressed.)

See you this weekend!