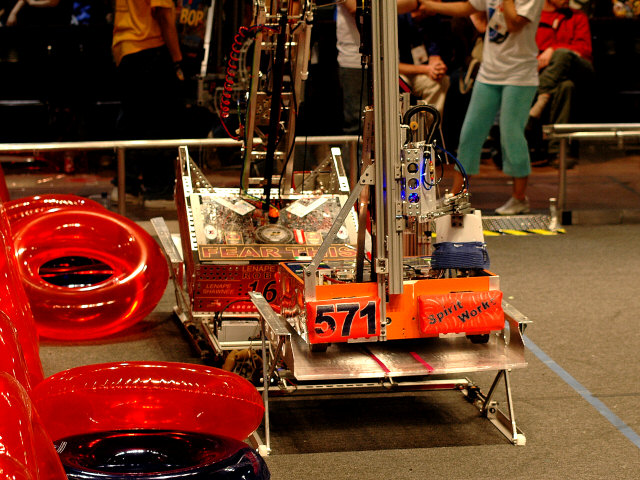 Team 357 scoring points by the use of their ramps at the Philadelphia Regional. Thanks to Team 571 and Team 1647 (for this lift)

My FVC team went to the Philadelphia FRC tournament and watched the elimination rounds after we did the FVC demo. Your robot was definetly my team’s favorite by far. The drive train was incredible and your ramps worked flawlessly. I was very impressed.

I hope I get to see you guys compete in the elimination rounds at the Championship. Either way, good luck! You’ve got one awesome robot.

glad to see you guys got it working after bayou

Yeah, you guys were awesome partners!

ill give you guys proof that 357 is the best team to work with every year.
team 1647 (my team) 555 and 357 (awesome bot) all were champs of the Deul on the delaware (off-season competitin in delaware that MOE (365) hosts) it was a great final game and the first round of the eliminations those ramps helped us every time. finally MOE caught on and dogged then 2 out of the 3 last matches- good defense btw, 365. its a $@#$@#$@#$@# shame the bot’s front end was bent and all. you guys built a stout machine.