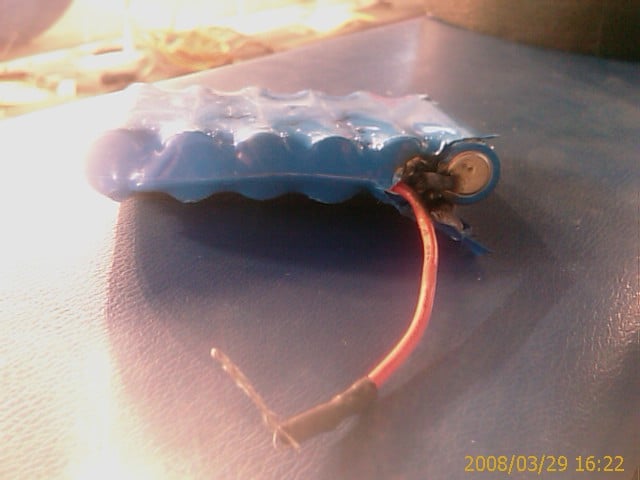 Where did your negative wire go?

We need to figure out why this happened. 1885 has a backup battery charger circuit that keeps charging our batteries to 8.5-9.0 volts and we’re worried the batteries will explode. We now have to keep replacing the batteries in between matches anyways (what we were trying to avoid) and also have to run them down. Changing the battery causes us to (even with the utmost care) pull out or dislodge a sensor or pwm wire, which has devastating results elsewhere on the bot.

I didn’t design our circuit, but our electrical mentor says we are using the standard FRC backup battery charger circuit and have mounted it on a PCB in such a way that we can also power the IR board off of it (separate circuits, same PCB). I showed the circuit to an EE at work and gave him a description of our problem. He said that at first glance, using a different-spec’ed zener diode may help to not overcharge the battery.

Any thoughts on this?

Nice photo Mike!
We keep a history of parts that failed, so we can add your photo to the archives. I saw you working, and I want to apologize for not taking time to stop and say hi, but I always seemed to be between emergencies and I started having trouble keeping straight which pit I was supposed to be in next.

This backup battery came loose during the match and was damaged. It wasn’t due to the charging circuit. Typical electrical vs. mechanical debate that the battery lost.
The black wire shorted at the battery terminal and the battery fell out of the robot and started to smoke on the field at the starting positions. The black wire got yanked to stop it I believe.

I was wondering why everyone was looking at that battery! I never got to see it up close.

My guess from looking at the failure mode, is that the damage severely bent the strap that tied to the next battery in the pack. When this occured it likely shorted out the first cell in the pack. Fully charged this cell could deliver several amps, enough to heat the strap and the battery and perhaps even welding the strap in place. The other cells in the pack are likely fine and could be used in other applications.

After that match I went down to talk to the drive team when they came and said that the robot was on fire. I wanted to know if Dave was anywhere near the robot (terminals up)