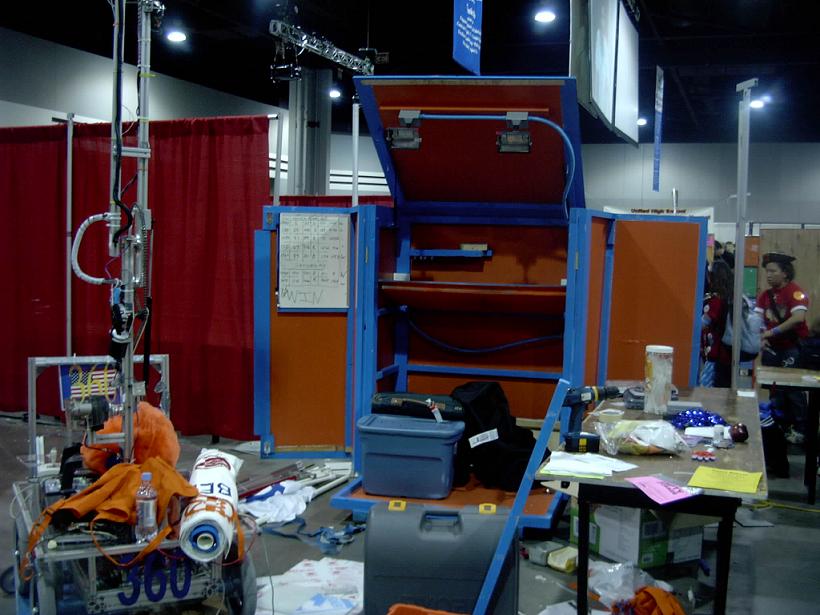 I took this picture on the last day when everyone was packing up. Nice looking and functional crate you got there Team 360.
Pierson December 31, 2018, 3:33pm #2

Thanks… This year everything came together and we created a nice crate. I modeled it after the gila monsters crate which we had seen at a regional a couple years back.

When the front doors close, all of our sponsors are on the front!

That is a nice crate for your robot but can’t you put your tool and spare parts in that crate when the robot is not in the crate. It seem you can’t put a box of stuff on the shelves in the crate for easy knowledge of your parts and tools. Just an idea. But ever nice crate.

The halogen lights are a nice addition. They can definitely come in handy when looking in the crate or working on the robot.

You could also use them for fundraising…charge people for tanning sessions in your crate!

The halogen lights are a nice addition. They can definitely come in handy when looking in the crate or working on the robot.

You could also use them for fundraising…charge people for tanning sessions in your crate!

That is really one awesome crate … How long did it take you to build? What materials did you use? … give some details! :]
Overall, I like the idea of using the create to double as storage and using it for to organize the pit area … our team could definitely use that. We should implement space saving ideas!

Well… here is the story of our crate. 3 years ago, I built the crate in ~1 hour before FedEx came. The crate was stored in the drayage company’s leaky semi. So, we pulled our robot out of the crate and a flood of water accompanied the robot. (Yes the was rust on half the robot)

The next year, a contractor helped us build a new crate with new wood. It was a beautiful crate but not really functional.

This year, we modified the crate to what you see in the picture. We have an amazing artist on our team who does all of our painting, logo, etc… so that is why the crate looks nice. You can look at the back side of the crate here: http://www.chiefdelphi.com/forums/pictures.php?&action=single&picid=8551

The design is based on 2 4”x4”s which serve as the bottom of the “pallet” a half inch piece of plywood serves as the base. We then have 1”x1” running around the top edge of the base. The sides rise up and the roof connects to the back with a long hinge. We used automobile gas springs/struts to lift the lid/roof. This way all we do is un-latch the roof and it pops open!

The crate is in half taken apart mode right now… But there are normally 2 shelves with wired in outlets on each shelf! A switch in the middle of the crate controls the lighting. We bring power in to the back of the crate with a recessed male plug which is mounted in the crate. An extension cord then moves power from the power-drop to the crate.

We ship not only the robot, but also spare parts, some tools, and our cart in there (yes it was overweight)

When we are in competition mode, we keep track of wins/losses and times on the white board on the left, pictures get displayed on the right “wing”, batteries are charged on the lower shelf (not shown in the picture) and work is done on the upper shelf.

I love the fundraising idea. The lights are certainly very warm!

Anything I didn’t answer? Let me know!

very cool crate. That’s a really great idea, its gotta be useful during the comps.