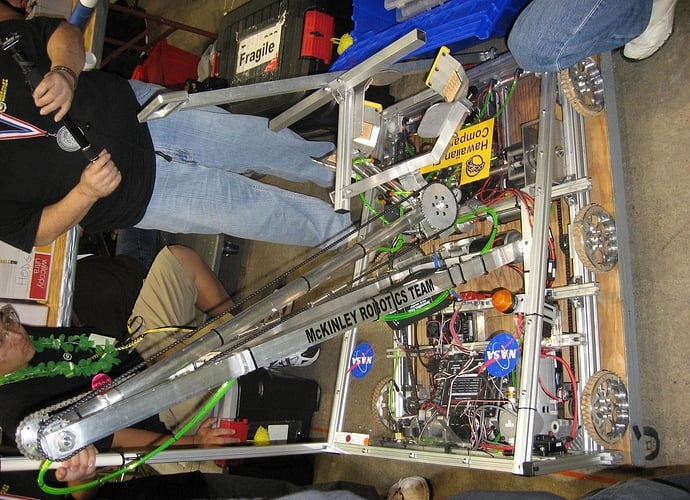 Team 368 was the 7th seed at the San Diego regional in 2007 and finalists. They did an amazing job selecting their alliance, and had a great robot themselves. They also had the most reliable autonomous mode of all the teams in San Diego.
TKM.368 December 31, 2018, 8:57pm #2

Our autonomous was 5 for 10 in qualifying rounds - all dead reckoning. We decided only in San Diego to add it in somewhat on a whim. All in all, it worked out rather well!

Our autonomous was 5 for 10 in qualifying rounds - all dead reckoning. We decided only in San Diego to add it in somewhat on a whim. All in all, it worked out rather well!

I thought sure you had a camera on board. I forgot to ask about it in the pits, but it sure acted like a camera. That little “aiming” dance just within range of the goal was a gyro or something and not the camera?

We enjoyed talking to you at the competition this year. Hate to say it, but yeah, no camera, just good old dead reckoning. We hadn’t even planned to implement it, but one of our students and mentors decided to give it a go just before the pits closed on Thursday. I must say that it was surprisingly effective and probably won a couple of our matches for us. I only wish I hadn’t interfered with them and not told them to go for the lower spider as they originally wanted to get the middle spider. My mistake, might have helped us even more.

That funny dance was actually the machine correcting its distance to the target via the encoders prior to deploying the arm with the ringer. I must say that it did look a bit strange doing that dance before making its final approach.

For anyone who hasn’t tried dead reckoning autonomous, give it a try. Its a bit easier than you might think. 50% ain’t bad for 30 minutes of coding.

That was a really successful autonomous. Really great robot overall though.

I liked the little brakes on the wheels. Very smart.

Ya, I really liked te brakes too. Very clever and pragmatic idea when it came to climbing ramps/panels like ours. And that was also a killer autonomous, prolly the most successful one at SD. You guys made for awesome alliance partners and really held your own out there. Great job guys