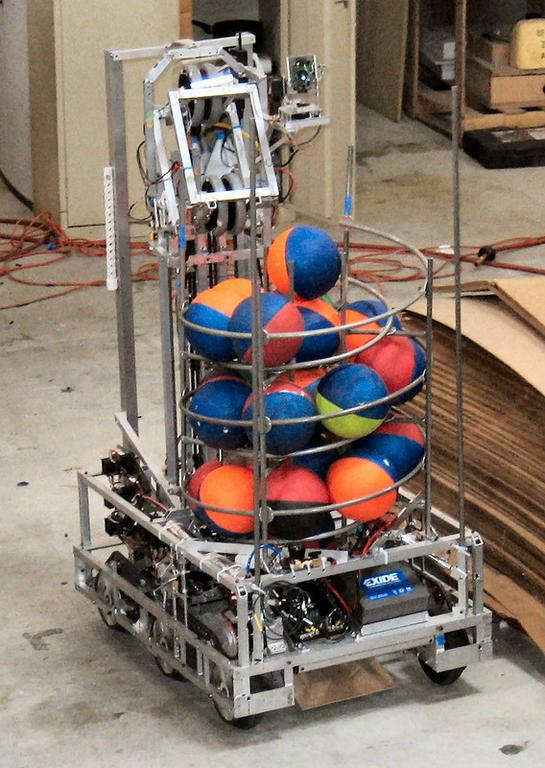 Here are some large videos I took with my digital camera when we were debugging the transistion from the helix to the conveyor system.

(and yes, we know that our swiss-cheese flag holder is now illegal)

what sort of equipment did you use to make the helix?
we were going to use some emt conduit tubing on our robot and we had a hard time making a regular circle

We used a central aluminum pipe that holds 60 aluminum rods in the formation of a spiral staircase. It’s a bit heavy, but we can make it with less machining and stuff.

i <3 the helix! i wonder where i have seen a helix before. :rolleyes:

I really love your hopper… looks a bit heavy, but it wins for the ammount of balls it can hold

I spent a little bit of time with 469 a day or two before ship, and that hopper is money! Very light, very sturdy, and great capacity. I can see some Industrial Design in this hopper.

In fact, the helix storage weighs less than 5 pounds complete. Completely made from 0.035" wall aluminum tube. Thanks for the comments.

We are anxious for GLR.

Wow, by the look of that robot, I’d say you were 15 pounds over. But looks can be deceiving I guess.

Wow, by the look of that robot, I’d say you were 15 pounds over. But looks can be deceiving I guess.

The entire frame is made of aluminum square tubing. That stuff is hella light.