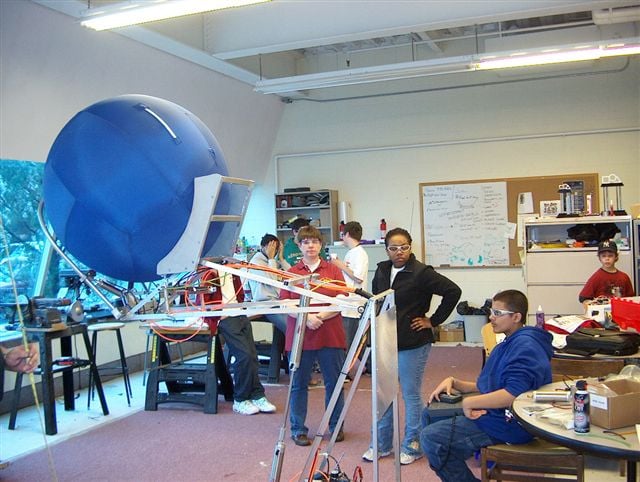 It looks great, but we were also wondering how you keep within the 80" rule? We had a similar design but had to modify it to make it fit the rule. At a static condition, with the ball on the floor in front of the robot, we were ok, but when we lifted and arc of the arm/grabber fell outside the 80" limit. We had to shorten up our grabber fingers to mak eit fit.

Good question. Watch this video and it will show you. If we don’t have the ball we can collapse the ball grabbers so they are at 78" max at the top of the arc to keep under 80".

We curved our grabber fingers upwardfor the same reason, as we had the same concern about that rule. We may even curve them more, as we are making spares in the event that they break during competition. It will also help us to hold on to the ball even better.

Were you guys at the Rochester scrimage? Pretty sure it was your robot I watched on the video doing the “reverse dunk.” So far you are the only other team, besides us, that I have seen take that approach. Good luck at your regional!

Good question. Watch this video and it will show you. If we don’t have the ball we can collapse the ball grabbers so they are at 78" max at the top of the arc to keep under 80".

What happens if you have the ball?

Remember the 80 inches is a cylindrical measurement, you can’t reach more than 80 inches outward, our does not. The robots upward reach is unlimited. There is no height limits once the match has started. We have our mid hight set to go under the bar but hit the bottom of the ball. Hope that helps.

Hey, Madison, my musical-theater-and-robotics-loving friend! Norm is partly correct; we are still w/in 80" with the ball; the gripper you see in the photo is actually going to be modified so the fingers angle up, which helps keep us just in the limit. The folding thing doesn’t really help us, obviously, when we’re holding the ball. We have a little adjusting to do, but my hubby (the main engineering dude) assures me that when all is said and done we will not measure more that 80" corner to corner with the ball held in the position you see in this photo, which is the point at which the ball (and grippers) are the furthest out.

Your much better than I at the explaining part, Thats what I meant but wasn’t sure how to say it. :rolleyes:

Yeah, 3 years of law school sure does teach you how to talk and write!!