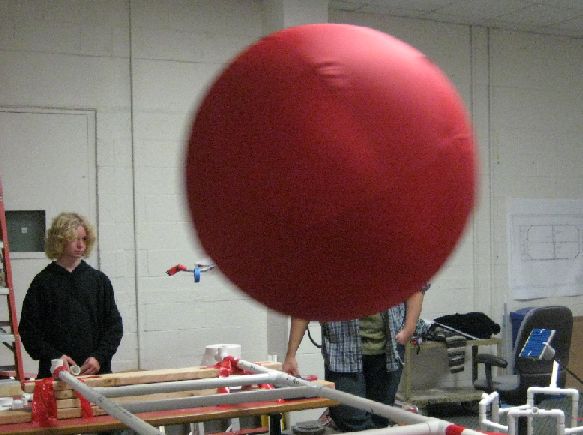 what kind of an arm mechanism did you guys use?

I hope nobody has hurt themselves with it yet

I’m guessing that the prototype they are using is going to be about the same distance away from the overpass when mounted on their robot. Either that or their prototype is only launching that ball at a third of its potential force :ahh:

im shure this is just a bench test of that launcher. it may be easier for them to fix the prototype to somthing and elevate their overpass moch-up for testing

Or their driver is 10 ft tall

It looks like its a pneumatic piston pushing the ball, I have to wonder how the plan on shooting more than once… (Pushing a ball with a piston like that is hard, and takes a lot of air)

I agree that there is no way that overpass is at 6’6". Also, (we ran into this) I wonder if the ball was in a “realistic” position, that is, if it was on the robot would it intersect whatever is getting the ball getting up that high.

Yes the overpass is too low in this test, but we set up our launcher to match the height of the overpass. Tonight we ran the launcher on the real field and got similar results. Basically, it’s powered by a 1.5" cylinder running at 60 psi.

yeah seems about right, when we ran tests it seemed to me the best cylinder to use was a 1.5" bore! How long is the stroke??

We used the 11" stroke. The key to getting maximum travel seems to be the angle of the cylinder and the shape of the pusher. I’m sure we will see some very interesting designs.

the real thing is going to be awsome