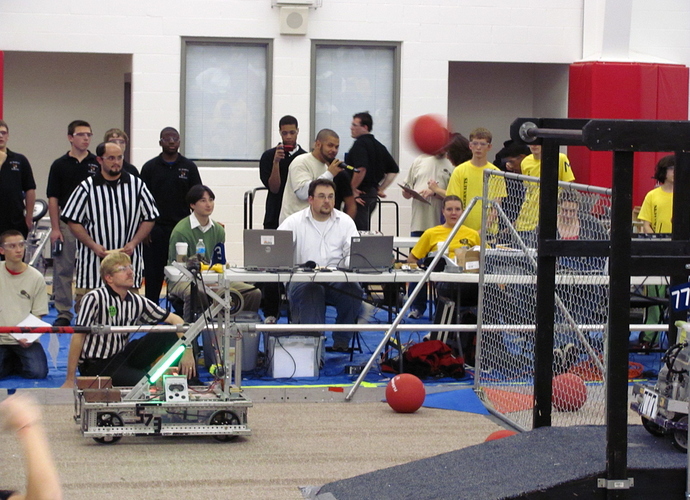 Team 573 at Roeper School. The game is called “Up and Over” and the main idea is similar to Junkyard Wars. To win, teams must have less balls on their side of the field than the other alliance. In this photo, 573 is the star of the show as everybody in the background watches the robot toss balls over the five foot fence.
blackiceskier November 14, 2010, 12:09am #2

573 is currently ranked 3rd out of 20 teams, however there are still more matches to play and the league drops the lowest 6 matches when determining final seeding order, so the order will change based on how bad/good your lowest matches are.

It looks like they have a pretty simple robot - a conveyor brings a few balls up to a simple flywheel? Simple tends to win these kind of events.

Does anyone have some kind of massive dumper that just flings a basket full of balls across the field?

“simple”?
2 mechanisms (conveyor and shooter).
This is about as complex as is possible for an OCCRA robot. Some teams have 3 mechanisms. Anything more is too difficult to build (both build period and build in weight).

Most teams have a 4 wheel drive or 2 wheel with casters. A few have 6. Most teams don’t have many powered mechanisms (we have 4 victors and 1 spike for our whole robot), but build something simple, practice, and go out and do what they do well.
All of the top robots (as of now) have a conveyor and a high-speed roller/wheel. Some collect and shoot on the same “front”, some (like 573) collect on the “front” and shoot on the “other front”.

We don’t have quite as much raw power as we do in FIRST. We have 3 CIM motors and Toughboxes (Most teams use these to drive, and use the third CIM to shoot), plus two DeWalt drill motors (really useful, 3-speed, and they can have anti-backdrive pins if you leave them in). Most use these for conveyors or arms. A few drive with them. The rest are all small (under 60w) - Globe, seat, powered liftgate, wiper motors. In past years, we have had only 3 drill motors and no CIM’s, so we are gradually getting more power.

We are also required to use 35 pitch chain only (no 25) because of the lack of precision in OCCRA robots, cannot weld, and cannot “precision-machine” (using a lathe, mill, or CNC machine). Most parts are made on a drill press and bandsaw.

We are also required to use 35 pitch chain only (no 25) because of the lack of precision in OCCRA robots, cannot weld, and cannot “precision-machine” (using a lathe, mill, or CNC machine). Most parts are made on a drill press and bandsaw.

Sounds a lot like the 1519 and 3467 workshops and you’d be surprised what you can make with them! I think what Chris means to say is that it holds a few ball and a one wheeled shooter. Nothing fancy to store balls like a screw or hopper no turret or pitch settings on the shooter. It is very simple and yet can be so effective!

It looks really good for the limits you guys have when building!

Chris: There aren’t any catapult robots this year. A catapult did come up during our design sessions and was one of the last to be eliminated. A lot of the robots look like 67’s robot for Lunacy.

A few more specs on our robot:

Drivetrain:
4 wheel drive
Each side powered by one CIM and Toughbox
Entire motor assembly slides along chassis rail for tensioning
8" wheels
Bricks are used for counterweights on the front of the chassis

Appendage:
CIM powers shooter wheels(ratio of 3:1)
Dewalt powers transport belt
Turnbuckles are used for tensioning on both the belt and chain(from Dewalt to belt)
Plexiglass arcs are used to funnel and center the ball before being sucked up

Other:
Our speed is around 8ft/sec
We can climb the bump
We have attained two clean sweeps(all balls on the other side of the field)

We used a similar design in last years OCCRA game, where we had to play basketball. We made a few modifications to increase the performance of our robot this year. We are very pleased with our performance this year and we can’t wait until Saturday.

Another quick question: what’s to stop a team from picking up every ball, driving up the bump, and just sitting on the opponent’s side of the field until the match ends?

Robots are only allowed to hold 5 balls at a time where holding consists of the robot touching a ball while it is off the ground.

If you want to read the rulebook http://www.chiefdelphi.com/media/papers/2409

One of the rules states that a robot may not carry more than 5 balls at one time.