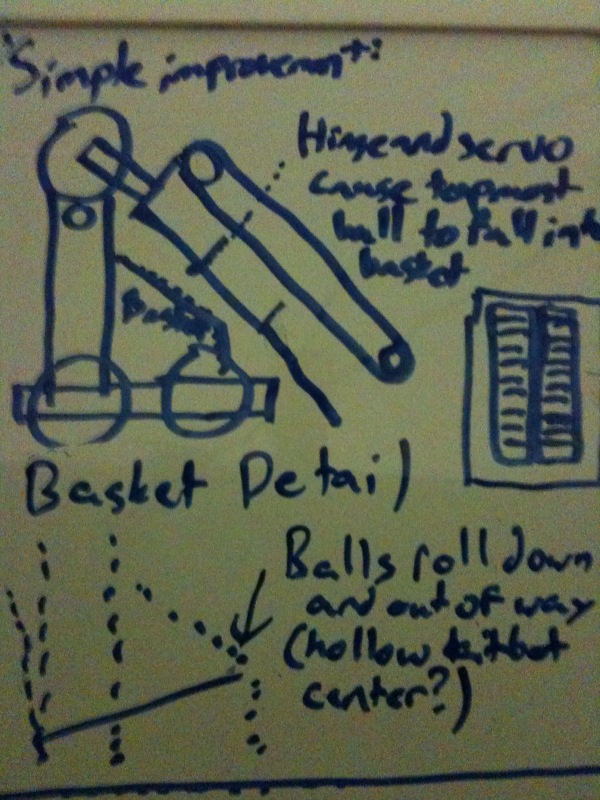 A bit detailed for a “teaser” but whatever

I got bored procrastinating on a paper I had to do, so I started sketching out ideas for the Vex robot I want to build for the Ruckus at the end of the month. I wanted a fairly simple design I could build with relatively little more than what’s in my basic kit, that could intake more than one ball, hoard the opposing alliance’s balls, score, and hang. Here’s my design sketch right now.

An end effector on a single jointed arm made the most sense to me for a manipulator, being able to raise and lower the arm for the various goal heights would be important. An added bonus, with a small bent chunk of Vex metal at the end, it should be able to hang without too much trouble. It’s 2 balls wide and in theory it should be easy to make the sides of the manipulator independently controlled, which would allow the robot to intake 2 balls at a time but only score 1 at a time into the narrowest goals.

From there, I wanted a way to hoard the opponent’s balls, as if I had them, they can’t be scored. This initially took a robot redesign, but then I thought of a simpler solution that’s only kind of sketched out on paper. A servo near the “top” of the end effector opens a trap door, dropping the balls out of the manipulator down. Since robots begin next to opponent’s balls, I can grab as many of those first as possible and dump them into the robot. A basket with sloped bottom holds the balls, and thanks to the way the robot will hang none will drop out when it flips over on the bar.

Basic Vex 4 wheel drivetrain there; holonomic would be cool but I don’t have omnis nor do I really want to get pushed too easily.

What do you think of the concept? Any glaring omissions?

Remind me to hit you with a clipboard when I see you at Ruckus… theres no way i’m going to be able to concentrate in classes for the next few weeks… ARGH!

I was planning on pulling an all nighter on the Friday before the game, but now I actually have to defend my title as you already have a design…

AND after seeing that your doing it all, I’m gonna have to do one better

Thanks for helping me fail classes

See ya in a few weeks with my many bots that I’ll be bringing up.

Now you know how I feel

Anytime I’m bored or there’s review of high school material in my engineering classes, I just pull out the notebook and sketch really rough ideas (as if this wasn’t rough enough). I’ve got a crazy holonomic bot (including calculations of the relative ball capacity of building an arm that rests along the diagonal of the robot size cube verusus paralell), an archimedes screw idea (too difficult), giant hoppers, sorting hoppers… I can’t stop

While I have a design nice and set, I’m going to be (hopefully) throwing my robot together Friday night (except for the chassis) with the assistance of other people’s kindly lent parts. Programming done in advance and fixed once the thing gets built. If not that, then I have about $200 on Vex stuff to buy. You should have a nice leg up on me as I’m assuming the worst in terms of lent parts and in general trying to use as little as possible (if I’m desperate, the whole design can work with 4 motors and a servo, but ideally 7 and a servo so the arm halves can be independently controlled + 4 wheel drive). Apparently all of RPI’s Vex parts are hidden deep in lairs I know nothing about.

As for doing one thing well versus doing it all, it kind of just all fell together… different height goals meant an arm was a simple solution, an arm means you can add a hook to hang fairly easily (if I distribute weight right), and the opponent ball posesssion solution was an “ah-ha!” moment I had just today after spending a week trying to figure out how to sort more than one ball at a time. Besides, what’s better than a good chokehold strategy?

(all of this “friday night building” makes me wonder… What if you had 24 hours to build and compete with a Vex robot for a competition you learn about at the beginning of the 24 hours? And you had to work in the same room as your competitors? With the same shared parts? Like a reality show, but robots

Well I have yet to really design and build anything yet. So that Friday will be a very busy day for so many of us… I do have it off from work.

How many people can you cram into a one bedroom apartment?

Well I have yet to really design and build anything yet. So that Friday will be a very busy day for so many of us… I do have it off from work.

How many people can you cram into a one bedroom apartment?

Cormier… start working on your design and send it to me so I can build it YET again the night before comp. That way I’m not blind when I come into it this time…

As for my bot, expect a simple, but elegant and robust solution to Vertigo. I can pull off my bot with 4 motors if I feel lazy, but if I use the full 8 then it will be even more dominating.

Guess where the inspiration for my '07 Ruckus bot](http://www.chiefdelphi.com/media/photos/29134) came from.

I should be bringing up enough parts to build several bots. Let me know what you need exactly and I’ll make sure to put it on the side for you, BUT only if you agree to help with the placebo bots that need to be built so random kids can join in too… better to let them use those then your creation (learned this last ruckus where my arm was built so strong, kids who decided to just use the bots when we were all away doing our respective volunteer jobs, they successfully bent a 6" shaft so much that I had to disassemble half the arm just to get it out of the bot.)

Rage was definitely an influence, but 330’s single jointed arms are what I’d probably cite, combined with 2 or 3 variations of the “sniffer” design from FIRST Vex Challenge. Operating a double jointed arm as well as a chassis from one gamepad would be too difficult for me, and the added flexibility never seemed to help me back for Hangin-A-Round (the arm was useful for distance though, which I don’t need here). From there, Team Overdrive’s 2007 robot and PWNAGE’s 2007 robot both had ring sorting mechanisms (and are also the only FTC robots I remember), so I was partly inspired by them. Throw in a bit of tribute to my very first robot and there you have it.

I’d be willing to help build placebo bots. I had the speed record for kitbot building back when I demoed with 1714 :3

(learned this last ruckus where my arm was built so strong, kids who decided to just use the bots when we were all away doing our respective volunteer jobs, they successfully bent a 6" shaft so much that I had to disassemble half the arm just to get it out of the bot.)

The aforementioned first robot ever built had so much torque in the arm (2 motors driven down to a 1:35 reduction) that shafts would twist into spirals if something went wrong; we had to case harden the shafts.

As for parts I’ll need… lots of shafts, a handful of gears, 4+ motors, some vex 5x15 sheet, tank treads, and some chassis rails / c-channel for good measure. And PWM cables. I think that should be it.

As for parts I’ll need… lots of shafts, a handful of gears, 4+ motors, some vex 5x15 sheet, tank treads, and some chassis rails / c-channel for good measure. And PWM cables. I think that should be it.

Alright, I’ll see what I can pull from our Drexel Team stash. We should be bringing it all up anyways as I am using vertigo to get the members of the team ready for clean sweep.

hmmmmm… what could this possibly be for?

Oh, and lend me some omnis

The current design I have doesn’t really happily support the 148 holonomic chassis as the ball basket dips right down into there. I might consider adopting that, though, resources and control implementation depending.

Oh, and lend me some omnis

The current design I have doesn’t really happily support the 148 holonomic chassis as the ball basket dips right down into there. I might consider adopting that, though, resources and control implementation depending.

Well the drive is only going to happen if I choose to drop roughly $250 on omnis… I currently only have my personal set of 2.5" wheels and i’m not sure what else we have in our inventory. The team’s stash is basically comprised of parts from my personal stuff and our other driver’s.

We may have some omnis but no promises just yet.

Then don’t worry about it. Omnis aren’t really that important to the design, just if you had a pile of em lying around it’d be cool if I could use em.

Great to see all this RahChaCha Ruckus excitement - make sure that you promote the event to everyone you can so that we can get alot of participants and get the public there to see Robotics in action.