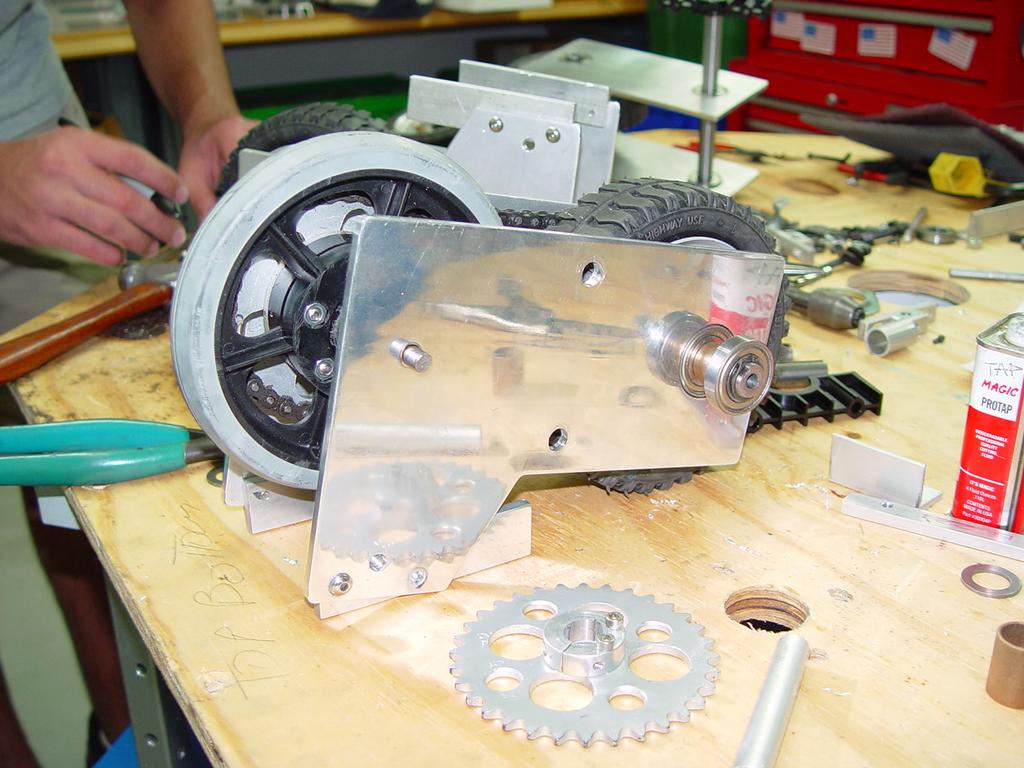 i wonder why we need a module for this…

Is it 4 wheel drive or 8 wheel? What I’m asking is will the lawnmower tires and the skyways be touching the ground at once or will the assembly pivot so you could have only the lawnmower or skyways? I imagine you chose the lawnmower wheels to have more grip for climbing.

Or maybe you’re planning on mowing the lawn with your robot after competition?

Right now its 6wheel drive, 2 of the assemblies only have one wheel in them, and yes the assembly pivots

edit: originally we planned for 8 wheels but took out a 7th and 8th wheel due to weight (our biggest enemy this year)

My guess would be that those modules themselves actually rotate. Put down the slick wheels for turning, the beefy ones for pushing, and rotating them climbs the step too. We considered something similar to this, but decided against it for weight reasons.

you could mill a TON of weight out of that aluminum plate, maybe on all 4 you could remove a lot of it and be able to put all 8 original wheels back in. just a suggestion

Ya we thought about takin out some pieces. Those two-wheel module weigh about 6.7 lbs and the other ones weigh only 6, only problem is we don’t have much time to take and mill out some weight and the structural integrity of those is really important

you could mill a TON of weight out of that aluminum plate, maybe on all 4 you could remove a lot of it and be able to put all 8 original wheels back in. just a suggestion

The loss of structural integrity compared to the weight gained is not worth it… WE milled out 1 fork panel… ( more like speed wholes… but they were big ones :-\ ) and we lost less than .1 lbs

I don’t disagree we could use some weight. But when it comes down to it… its not really a ton

It was barely noticeable

The loss of structural integrity compared to the weight gained is not worth it… WE milled out 1 sprocket… ( more like speed wholes… but they were big ones :-\ ) and we lost less than .1 lbs

I don’t disagree we could use some weight. But when it comes down to it… its not really a ton

It was barely noticeable

You could remove a considerable amount of mass from each of those plates while doing relatively little to change the structural integrity of the design.

Think about bridges, for example. Trusses support immense load, yet they’re largely open space. Cutting a similar pattern of triangles into plates such as yours is often an effective way of reducing weight while maintaining strength.

We also lightened everything we could from the start (axles, gears, sprockets, shaft collars) Without the hanger, our robot is basically the same as last year’s, except about 35 lbs lighter. I’d say we did a good job with lightening. You will see strategically placed cutouts and bends and a well chosen material thickness, not a whole bunch of speed holes.

You don’t always need thick material to get the job done. Throw in a couple bends and it makes it a lot stronger.

Our battery/compressor tray is only .040 thick but it doesn’t flex because it has bends.

Over the off-season, each team should really assess the strength of each component and try re-making it out of a thinner material or with more cutouts.

it’s amazing how simalar those are to ours…

it’s amazing how simalar those are to ours…

Well except for the fact that have a considerable amount of spacers running through the centers where these designs would be cut out. And we did run into problem withs spherical our cuts weakening the system. Infact the forks we milled where the only ones we had problems with

I was not saying that it couldn’t be done.

I was saying that the difference in the weight made is basically nothing. its 3/16th alluminum and we could cut out a max of about 1x2 inches. Weighing only a few grams. ( to be exact its about 0.0360 lbs per piece )

If it had been better designed in the beggining when those parts were designed it could have been designed with the cut outs inplace. But with our current system it can not be done with enough effectiveness to cause reason to do it. But again, the extra work done on it, and the weight gained we felt were too minute to deal with under our certain time restraints.

THanks for the advice tho keep it coming

ps. see our bot in action ( sorry for bad editing job, I’ll be re-editing this weekend hopefully ) View Us

Our forks in action

Us hanging because of our lifting system

Heres a lower resolution vid (5MB as compared to 25MB)

ps .avi’s soon to come if this one doesn’t work (people have told me that it won’t work on their computer.)

that is very cool…we only use ours on the back of our robot and have an omni wheel bar that comes down and suppports the front…i really like the automation of the system…what are you using for the feedback… limit switches?

i like it and look forward to seeing this bot inaction

We use banner sensors, one in front of each wheel. The way it is set up is that when one of the sensors gets over teh step it pulls either the front or the back up. The driver controls if the banner sensors are activated or not with the trigger button on the joystick. I think you can see the banners in one of our posted pics. One thing we have to do at comp is reset the banners to the hdpe on the step. Works well for the most part and takes one thing out of the driver’s hands (not that me and dan couldnt do it

Greg, as abeD said earlier, we’re doing the same type of drivetrain. We are going to be using limit switches for feedback. We considered using other kinds of proximity sensors, but due to time and money constraints, we chose to go with the limit switches we had lying around the lab.

How about you guys?

look here you can see the banner in front of the back wheel.