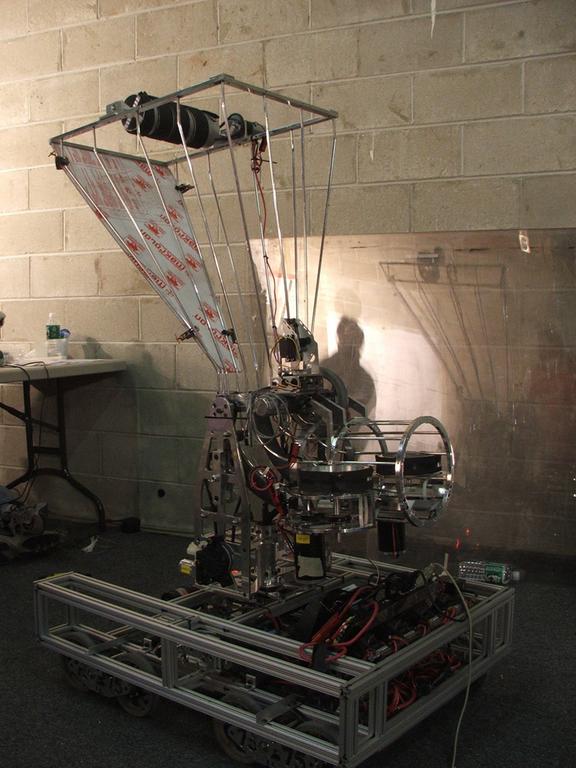 The robot features an amazingingly powerful chassis that can easily climb the ramp. The shooter is extremely accurate and is on a rotating turret. The shooter can also tilt up and down. The entire hopper tilts down and can pick balls off of the floor. We can also dump by tilting downward.

I’ve seen this bot a lot, its really slick. The 8 wheel drive will push anything, and the big hopper up there, its also a ground feeder, the electronics are also organized in an innovative way. Great robot 75.

I have seen this bot in person, however I did not get a chance to see it in action. Other people on my team did and they told me to watch out for the Robo Raiders. Great job guys and good luck in the 2006 season. We’ll see you at NJ and Boston, hopefully Atlanta too!

Its sooooo shiny i miss it already, I’m not sure what i can say about it without saying TOOOOO much, but its incredibly accurate even without the camera, and it has enough torque to pull/push 250+ pounds… oh and lastly, we have a low center of gravity, so we can manipulate other robots even on the ramp without a major risk of tipping.

you can see a close up picture of the trucks almost the same as in the picture from our 2001 robot on http://www.skywaywheels.com/usfirst.htm#

thanks for the kind words cougars

Hmm, well on my monitor the picture is pretty dark and hides quite a bit of detail. I took it upon myself to lighten it up for you all to see.

That is one sweeet piece of hardware. I can’t wait to see it in action at Trenton - except I also fear its capabilities. Wow!

I saw this robot successfully firing the balls into the goal. It is very, very smooth! Not only that, but 75 polished the aluminum on the robot to the point where you need to wear sunglasses to look at it.