pic: Team 78 Drivers with the awards 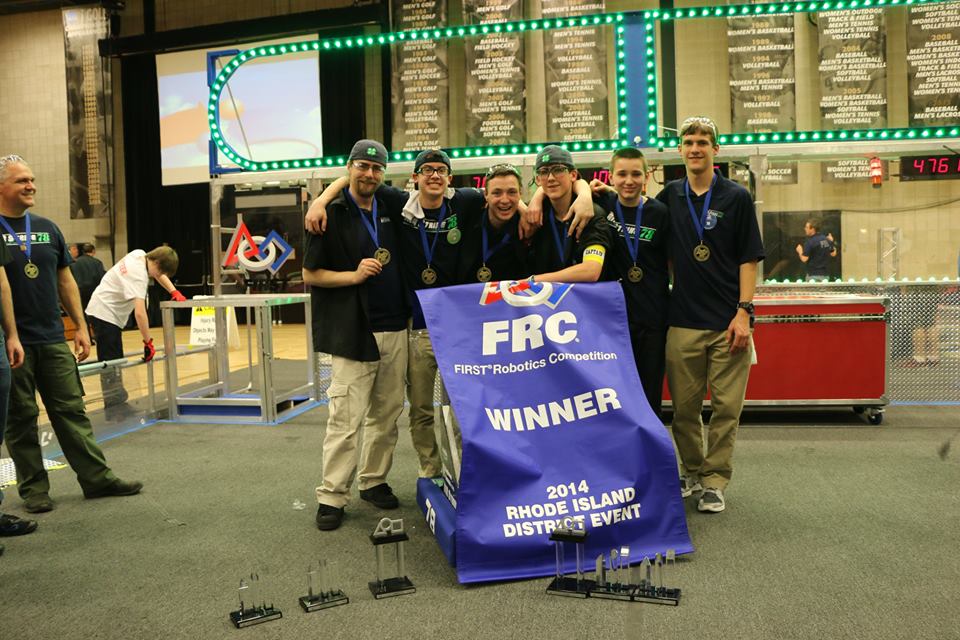 Congratulations on the win guys!

Congratulations guys! You really deserved it. Volunteering at Groton, I got to watch you guys drive from behind the glass, and then at RI I got to see it from the other side… you guys truly are a class act. Your drive coach was constantly giving the advice that I love to hear as a driver. Your drivers make it look easy to do some sweet maneuvers with that Drive In A Day, and your human player was one of the fastest and had great form (no G40!).

Congratulations on a great pair of district performances: Chairmans, Entrepreneurship, and District Winners! See you in Boston!

Let nobody ever say it is impossible to rebuild your robot on the field in a timeout and still come out and drop a 2 ball auton to win the match.

It was awesome playing with you guys.

Let nobody ever say it is impossible to rebuild your robot on the field in a timeout and still come out and drop a 2 ball auton to win the match.

It was awesome playing with you guys.

I was so impressed with my drive team and pit crew…they performed admirably. We had to replace the same gears at Groton, but that was during lunch break, not during a 6 minute time out after losing match 1 of the finals.

First I wanna start by saying Joe congrats on your team’s victory at the Southington District. I’ve only heard great things about it and I’m sure you guys put on a great event.

Next I just wanna say Dave, me and you talked all weekend about the possibility of us meeting Saturday afternoon and boy did it happen and it was awesome! You guys, 2168, and 5163 were great to share the finals field with and as I’ve said already hope to see all of you again at the New England FRC Region Championship in two and a half weeks.

Andrew thank you for everything you did this weekend and man as soon as we realized our robot had an injury you guys were the first to be there with spare gears so we appreciate it. The same to 1519. You guys were also quick to offer help during our timeout and even tried to use one of your own to extend the amount of time we had with the bot.

Lastly real quick TD78… that steel gear that Dave machined days before RI… I helped install that one onto the robot for you so thanks for everything Rollin’ T!

I also would like to thank the coach from 1519 for his very GP response to our problem. During the finals match we were pushed into the one point goal and that made us break our gear attached to the arm and the output shaft gear. This needed to be fixed before the next match or we would not be able to play in the next game to our full potential. I just remember 1519s coach coming under the truss to say to me and my coach saying that another time out can’t be called even if the other alliance calls it. Team 78 would like to thank you for such a kind thought. Ever since I joined first I have always loved your designs. Especially that full court shooter:D. You were a great in the finals and a great team to face and play matches with.

I also would like to congratulate the guys from 195 on their district win. You guys deserved that. Especially with your 2 ball hot auto. #suppacool. We had alot of fun with you guys at Groton. Even after what happened. Hope to see you guys in Boston. And maybe play some matches together. Especially after how both our robots are fixed.

Thanks guys! Groton was rough for both of us towards the end. I really hope we can work together again when both of our robots are working 100%. See you in Boston!