pic: Team 78's robot in the pits on Galileo 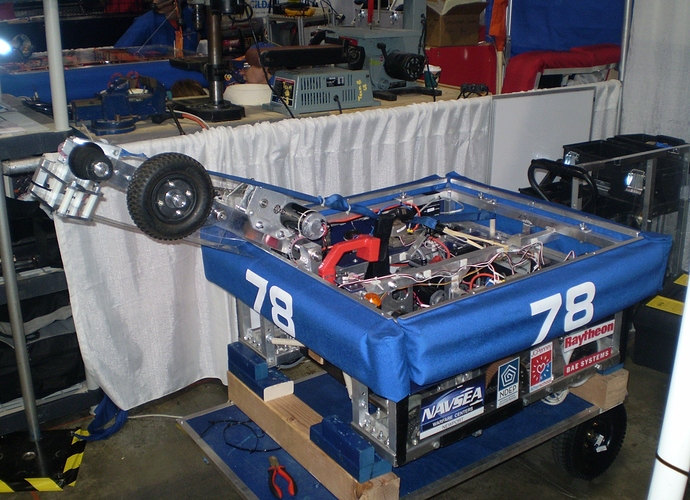 A picture I took of 78’s robot, complete with their awesome “hanging” mechanism. They literally drove up the tower with that arm! The scouting people I was with was blown away by such a cool design when we saw it in action for the first time. It was an honor working with you guys during eliminations on Galileo.
Josh_Drake January 1, 2019, 3:04am #2

Very good robot. We were all impressed by team 78! Good job!

383 from Brazil did it very effectively and quickly in Boston and Hartford.

Seems like it worked out pretty well for them.

It looked like 6 seconds once on the pole to me. (from a vew videos on TBA).

359 also drove up the pole, but it took a long time to do it, around 10 seconds, and most hangs weren’t official because they ran out of time to drive the rest of the way up.

Team 78 was great to have as alliance partners in Manchester. Not only did the wheels work very effectively but the driver was able to hook on (so to speak) every try. I think they successfully hung every match in the playoffs theough the finals. I was worried when I saw the wheel taken apart in the pits but evidently they were able to get it working again.

Here’s a great picture from Manchester:

We were kicking the idea of a PTO around during the build season. Maybe we’ll try to incorporate one into the design this summer. I know 1114, 254 and others had PTOs for their climbers. I didn’t see 1114 up close, but 254 was a work of robotic art.

383 from Brazil did it very effectively and quickly in Boston and Hartford.

That’s very nice, but our hanger wasn’t working correctly in Boston: the mechanism was fine, but we had problems aligning with the tower that we didn’t fix 'till Thursday at Hartford.

We could line up and climb in five seconds, and our gearing was very conservative: we could’ve doubled our speed, but the team chose not to go that route (we had two FPs and one CIM in that gearbox) - I was outvoted

As for the tunnel, we could go under, and actually did a few times, but going over the bump was generally faster.