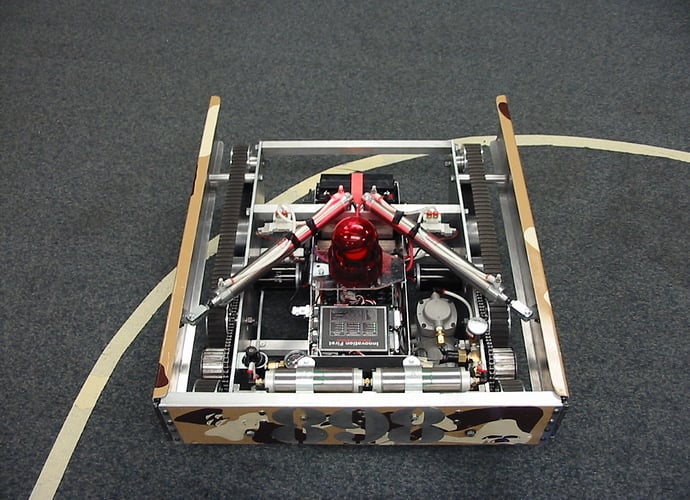 Yes, that is vinyl camo and yes those are timing belts being used for tank treads

That is a very clean design. Your team sure stuck to the KISS principle. Those wings should be able to fend off other robots too. I can’t tell but are the drill motors in there anywhere?

<edit>Those pneumatic cylinders look much longer than any 12 inches. What size are they?</edit>

Looks great. What kind of traction do you guys get with those belts?

I hope you have a good way of keeping those tracks in. When I was on 247 3 years ago we had a very similar tank system. If we were going full speed and took a turn too rough sometimes the treads own traction would pull itself out of the rollers. And when that happened… it took a while to fix, it wasn’t a problem that you could just drive the other way and it’s fine again.

Other than that possibility, very nice, clean, well balanced design. (Less the compresser vs empty space). Just about everything is symmetric which is always helpful for operation. Less differences = Less Problems.

Thanks a lot! We totally stuck to the KISS principle this year and last. We didn’t use drill motors anywhere on this bots, only CIM’s. We get pretty good traction with the tread system (the metal grille fits nicley between the cogs). We haven’t had too much of a problem keeping treads on, but we cut some of the flanges deeper just in case. We had some problems with the flange on the drive wheel coming off a lot, but that was nothing a little spot welding couldn’t fix. I didn’t order the cylinders, but I believe that they are 12" stroke and 1.5" or 1" bore (not sure though, another kid ordered the cylinders really early, before we even had an agreed on arm design. We just used what we had).