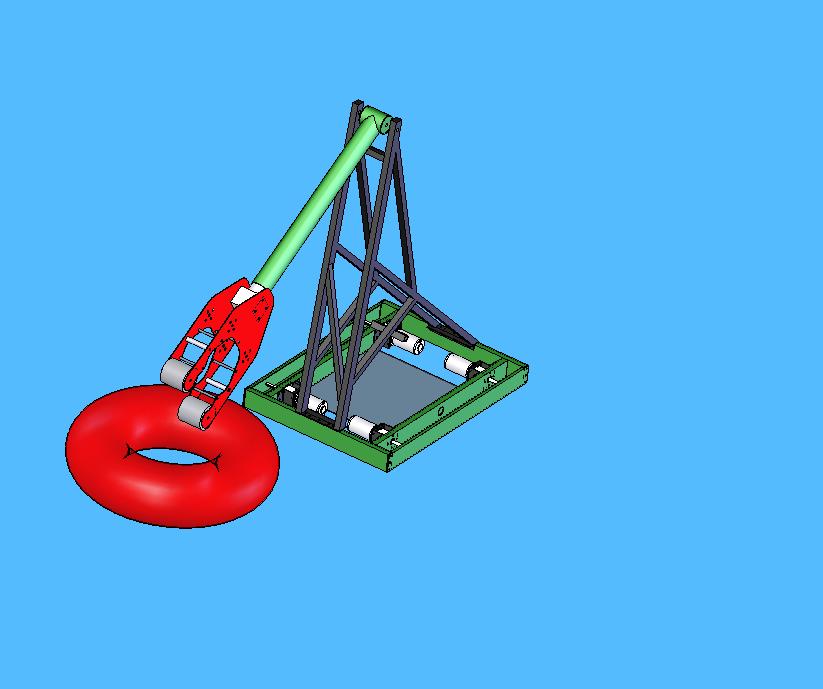 This is our CAD. It is in the ’ weight class and can score on the top goal. Tell me what you think!
–Dan

What Danny is trying to say is thar our robot is in the 5’ 110lbs weight class. The final bot will have the electronics on the piece of lexan in the middle, and have a camera mounted somewhere on the superstructure.

Looks good. The first thing I noticed was the 4 CIMs on planetaries, rather than a more traditional 2 motor gearbox. I also see a hole for a middle wheel, but it appears either to be unpowered or powered from two sides. Is there actually a 6th wheel or are you looking at a more exotic drive system (mecanum perhaps)? I like the manipulator, and I’ll be curious to see it in action.

6 wheel drive train, the hole is for the bushing. The middle wheel is going to be lower, and driven by the planetaries. The arm still doesn’t have motors modeled in too - probably looking at the window motors.

Are you planing on rotating the “sucker” with a motor to allow for more easy acess to the HP loading station?

if you motorized your two input rollers for tube handling independantly of each other, you`d be able to rotate the tube as well as grab and release it.

It looks to me that if your robot is about 60" tall then that arm is probably also close to 60" long. So, If that arm swings to horizointal, will the robot still fit within the box? If not, it means that you can only swing your arm to horizontal in your own home zone. Then before you leave your home zone, you would have to raise the arm up high to make it fit in the box and only maybe score in the high spider and never bring the arm down until you got back to your home zone to get another ringer from the HP.

My suggestion: You can change your design just slightly so the pivot point of the arm up high is to one end of your robot. That way you can at least rotate it to all angles on the opposite side and still easily stay within the box. With this design you still cannot swing it to the same side as the pivot other than maybe to score on the high spider only. Good luck with your design. It looks very good and solid other than the flaw I mentioned above.

Raul - Thank you very much. We’re now revising our design to acccount for the 72" x 72" limit. Expect something new pretty soon.

Looks simple so if anything goes wrong you’ll be able to fix it.

I was just wondering how you are manipulating the tube. I was just thinking if you had those two rollers/wheels in the front of the grabber and you turn them in opposite directions will it spin the tube at the point you’re holding it at?

i like the grabbers that actually squinch the tube, rather than a grabber. why couldn’t 996 think of this?? -cries-
nice design, which regional are you guys going to? we might be able to see y’all if you happened to mosey on down to the phoenix regionals.

We won’t be in Phoenix, sorry. We’ll be at Silicone Valley and maybe Vegas.

i think the design is great. it looks very simple, “keep it simple stupid” , and the crabber looks like it has potential. I’ve seen people trying to design grabbers with like 5 pivot points and moving parts, too much.

How much does that manipulator weigh? It looks pretty beefy and even more so if you do plan on driving the rollers in specific ways to rotate the tubes and all that.

Can you only score on the top row? Just wondering, because it seems like it would be hard to release the inner tubes on the lower spider legs with that roller grabbing mechanism…

It’s going to score on the top row, one way or another. We’re still not sure how heavy it is, I’ll let you know when we find out.