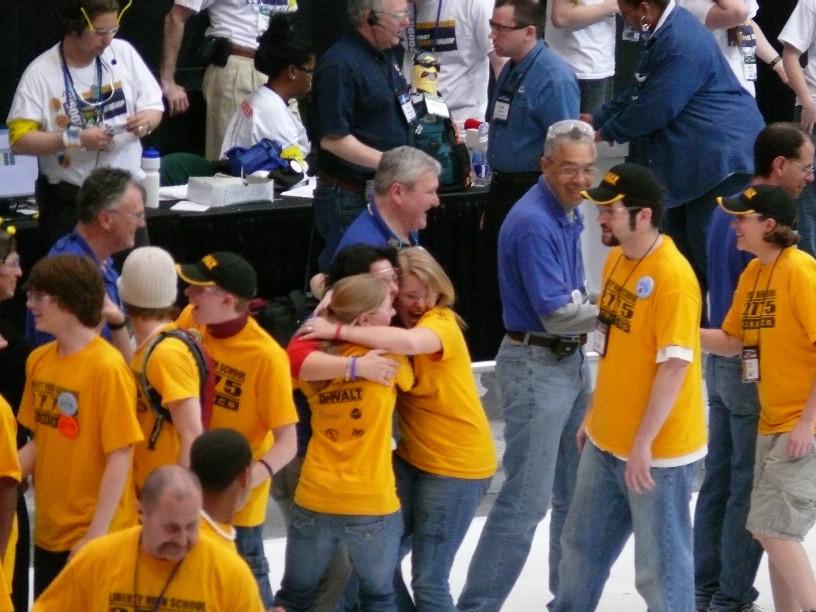 Rookie team 2775 receiving their silver medal on Galileo. Eliza and Shelby are so cute! This picture makes me smile. (The rest of them are cute, too…)
Akash_Rastogi January 1, 2019, 1:16am #2

Congratulations Greg on an outstanding season!
Psh…and you were worried about people not noticing you guys.

Team 2775 was an amazing rookie team playing out there in the Galileo finals! It was a great match.

I was and still am very impressed with team 2775! You guys played hard against us in the semifinals, and really made it hard for us to score. Can’t wait to see what the team comes up with next year! Congratulations! This is one team to watch out for!

it was great playing with you in the finals in st.loius good job and you had a an excelent robot

I was very impressed, not so much with the accomplishments of the team but the way Greg looked at it, he explained how there were 300+ other teams in the building that would love to be where he was. I think that is among the best attitudes for anything. Great job 2775, I was impressed by you guys, I hope you can have as great a season next year.

Greg, I promise I will get the pictures of you guys I have uploaded soon, I
havent cleared off my camera yet.

Thanks all for you kind words of encouragement. I am a strong advocate of giving credit where credit is due, and while I did have alot to do with the success of this team there were many others who played a big role.

First : Sarah Grenier, is my team co-leader engineer extraordinaire. She has had many years of FIRST experience starting in NH on a HS team in 1995, going to WPI with 190 and then working as an engineer at Intellitek on team 40. She deserves a ton of recognition, as we could not have accomplished nearly as much without her. She posts on CD occasionally under the username Gren737

Teachers: Mr. Price, Mr.Baker, and Mr. Mason, you guys rock, having numerous teachers that split the responsibilities involved with running the team helps keep people from burning out, and they do the job of team admin, great!

Parents: If you saw us in Atlanta or St. Louis you would notice that we have quite a few adults on the team. As it turns out FIRST in TN is addicting and almost all of our students parents on the team are involved and have attended meetings, competitions, and events thought the year. Most of our kids are freshman and sophomores so having a strong parent base is crucial for our success. Thanks for everything.

Sponsors: Everyone knows that we have a terrific partnership with DeWALT, and I feel that this relationship will continue to grow for many years to come. The engineering managers “GET” FIRST and are great advocates for the team. In the future teams everywhere may get a chance to feel the impact B&D/DeWALT in the KOP or otherwise. I would also like to add an appreciation to both NASA and PTC, both of which contributed a large portion of our teams budget and made our team possible.

Most Importantly the kids on my team. It was their enthusiasm and willingness to try something new that made this all possible. I am sure that they will all take something away from this year which will stick with them for the rest of their lives.

We have also received support from other teams, which helped us during the build season, before the team even founded, and all throughout our process of reaching our goals. (shout outs to team 340, 1712, 148, 16, and 768)