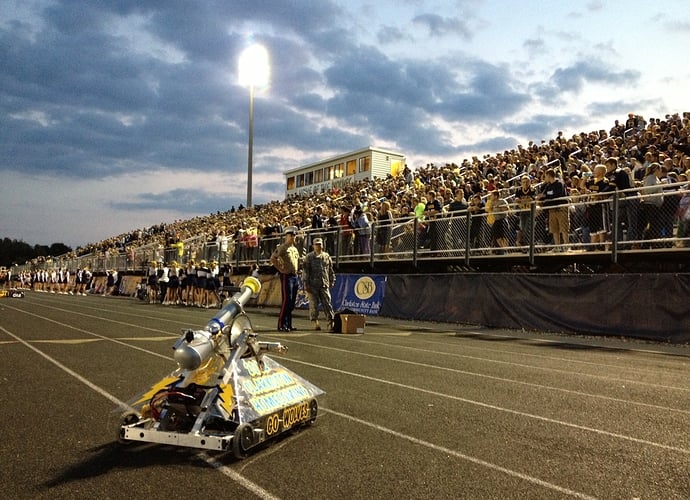 Seeing as other teams have posted their pictures of their robots with T-Shirt cannons on them as well, might as well share our robot. This past week was Clarkston’s Homecoming week and on Friday, we demonstrated our robot to our school at the Pep assembly and later that night, shot t-shirts to the entire football stadium at the football game. It was a huge success and we cannot wait to add more functionality to our robot and demonstrate it in even more locations!
Travis_Hoffman January 1, 2019, 7:13am #2

Very cool! Do you have any videos of it in action? How about some details on the design?

Very cool! Do you have any videos of it in action? How about some details on the design?

Here is the very first launch. Note that we were only shooting at 20 psi. We also did not know at the time that we were going to shoot at the Homecoming Game that night. So we were trying to set it to shoot in our gym. Now, we have tried to shoot at 60 psi which I will upload a video later, and different types of balls instead of just a t-shirt.

As for info, I will get that up as well once I talk to my mentor. I do know that we used the 2011 practice robot’s base which had the A-frame for our extending arm.

Cool picture. Our school is in the process of designing a t-shirt launcher robot now. Do you have any videos/pictures/cad files or anything else that you would like to share? Thanks!

Hmmm…could that be the practice bot chassis from 2007???

Hmmm…could that be the practice bot chassis from 2007???

No. The 07 chassis used box beam around the wheels. Visible http://www.chiefdelphi.com/media/photos/27145

No. The 07 chassis used box beam around the wheels. Visible http://www.chiefdelphi.com/media/photos/27145

I could recognize that huge gear and chain anywhere! Cool bot.