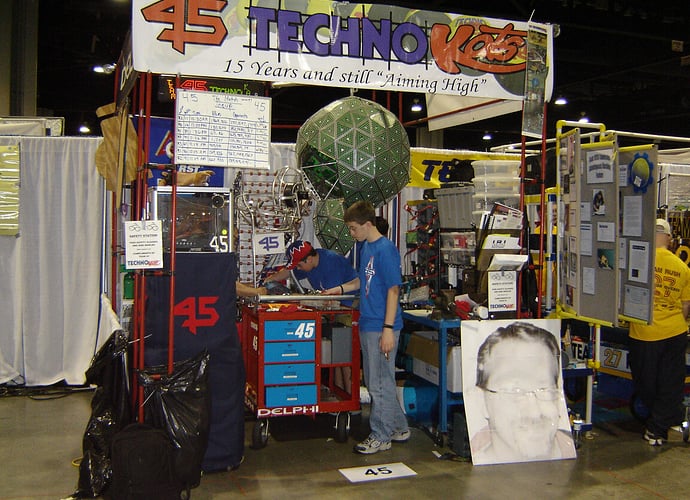 The TechnoKat Pit in Atlanta, complete with the team built, LED covered ball. This ball is used to ring in the new year in 45’s hometown of Kokomo complete with a mini ball drop on the square. I heard tonight it was going to be used to signal the closing of the pits, but I didn’t get to stick around to see it.
b-rant April 29, 2006, 12:57am #2

hmmmm…kindof reminds me of a buckyball

The question is, what is it for? Decoration, or a fusion reactor to charge your batteries?

This is team 45’s infamous New Years eve ball drop ball. It is used to ring in the new year in Kokomo. We draw around 5,000 or so people annually. It is dropped off of a 5 story building downtown. It consists of over 30,000 LEDs. There are also some high power LEDs used as strobes. It is one heck of a sight to see!

It was gorgeous - Molly and I were watching it almost incessantly when we were in the pits!

That picture doesn’t do it justice.
It was quite pretty to look at.

That picture doesn’t do it justice.

You’re right.
Anyone have a picture of it lit up?

You’re right.
Anyone have a picture of it lit up?

I do, and some video since we were right across from them in the pits.

Double post, but long time delay between them so meh…

Anyways, here are some still pics:

Cool pattern (yes, this is lit condition) 1 of many wild patterns I saw all weekend.

Close up of panels (unlit condition) All pre-made, and then assembled into the overall shape.

Packed up and ready to go back to Kokomo (unlit condition) It was really heavy… or at least it looked like it was.

Video coming tomorrow when I finally get a chance to upload it.

The ball really is not that heavy. We weighed it in at about 85lb. which isn’t as bad as our first ball, so I heard. If you really think about it though, it is just an empty shell made of plastic and aluminum. If you look at our chairman’s book on our website (www.technokats.org for those of you who don’t know it), it had a picture of it being used in Kokomo bringing in the year 2006.